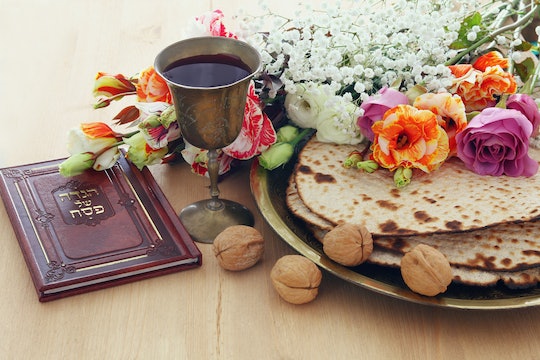 If You Haven't Marked Your Calendar Yet, This Is When Passover Starts This Year

Whether you celebrate Passover or you're just trying to learn more about the holiday celebrated by your friends and co-workers, you're certainly not the only one unsure about when exactly it's happening. While the Spring festival typically begins in March or April, the specific dates of when Passover starts and ends in 2019 occur in April, and while it may seem like it varies year-to-year on one calendar, it actually doesn't on another.

While Passover, one of Judaism's most sacred and celebrated holidays, seems to hop around on our modern calendars, many observers will be quick to tell you that the timing of Passover is indeed consistent because it falls on the same day each year of the Jewish calendar, which "is tied to the moon's cycles instead of the sun's," explained Judaism 101. Passover goes from the 15th to the 22nd of the Hebrew month Nissan, and this year, that translates to sunset on April 19, 2019 until sunset on April 27, 2019.

If you're not Jewish, you might already be scratching your head – since when do holidays start at night? In Judaism, always. In fact, every single day actually begins at nightfall, rather than sun-up. As Chabad.org explained, "This is based on the story of creation in Genesis, where at the end of each day it says, 'And it was evening, and it was morning; day one', 'And it was evening, and it was morning; the second day' etc." See how evening is mentioned before morning? The Torah actually defines each day as evening to evening. This is an important concept to understand.

Depending on who you ask, Passover (or Pasach in Hebrew) is either seven days or eight days, and the discrepancy in calendars is the reason for the discrepancy in length. Because there was confusion about the differing calendars in ancient times, an extra day was added to many of Judaism's observed holidays, according to Judaism 101. Today, while some branches of Judaism have gone back to the original length taken from the Bible, other branches have continued to celebrate the extra day.

For those unfamiliar with the meaning behind the sacred holiday, Passover is a time to celebrate and honor the liberation of the Israelites from over 400 years of slavery in ancient Egypt. The Hebrew word Pasach means to jump or pass over, and the holiday's name originated from the Jewish miracle in which God passed over the house of the Israelites during the tenth plague, sparing their first born sons, according to My Jewish Learning. For the first two nights of Passover, families and friends gather to eat a special meal called a seder. As Rabbi Norman R. Patz explained to Reader's Digest, “The word ‘seder’ means order. The Passover meal is an ordered meal, which includes reading the haggadah, the text that tells the story of the Israelites exodus from Egypt."

Passover is undoubtedly an incredibly important time to Jewish people around the world, and if you would like to teach your children about this holiday, there are plenty of fun and interactive ways to do so.