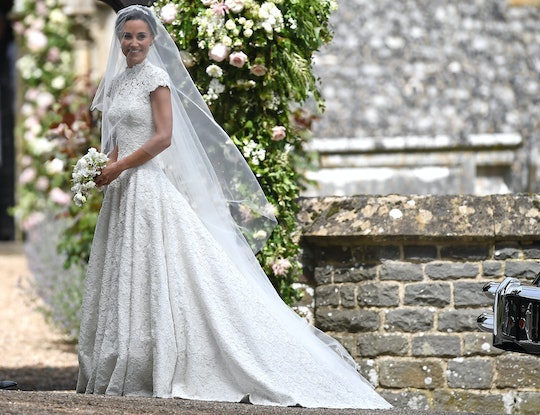 When Is Pippa Middleton Due? She's Reportedly Pregnant With Her First Child!

The baby news just keeps on coming this year! Duchess Kate isn't the only Middleton with one on the way — her sister is reportedly pregnant too, with her first child, as Reuters reported this weekend. Details are still being released, and fans have a lot of questions. For one, when is Pippa Middleton due? Thankfully, initial reports have released some information.

Romper's request for comment was not immediately returned, and a rep for Middleton declined to comment to People. However, numerous reports have shared information on the reported pregnancy. While Princess Kate is expected to deliver her third child with Prince William in a matter of days, her sister has a bit more time left before her due date. The Sun on Sunday first broke the news of Middleton's pregnancy early Sunday morning, sharing that she and husband James Matthews are expecting a baby this October, according to an unnamed source close to the couple. That means that Middleton is fresh out of her first trimester.

Following her 12 week pregnancy appointment last week, Middleton began sharing her big news with friends and family, according to The Sun. And in case you were wondering, it was welcome news for the mom-to-be. "When Pippa found out she was pregnant, she was obviously thrilled and utterly overjoyed," the unnamed source reportedly told The Sunday Express. Princess Kate, who was the second person to learn of the coming baby, too, "could not have been more delighted" by the news, according to the same source. But, then again, who could be anything but ecstatic about another royal baby — or at least royal-adjacent? Dad was, of course, the first to hear about the new baby.

Middleton and Matthews were married on May 20, 2017 after getting engaged in the summer of 2016. It seems that they have had babies on the brain for some time. The unnamed source told The Sun as much:

Pippa and James have always known they wanted children. They have made the most of their first few months of marriage and felt the time was right to expand their family.

Well, it looks like they got their wish! Aside from a shared interest in parenthood, Middleton and Matthews also have big love for one another. Before their wedding, a source told E! News that Matthews was out to win Middleton's heart for some time:

James [Matthews] has always been on the scene. He is super charismatic and charming, good looking and always held a torch for Pippa. They have always had insane chemistry, but Pippa was always in a relationship.

Middleton first entered the public eye when her sister, the Duchess of Cambridge, married Prince William at Westminster Abbey in London on April 29, 2011. Middleton served as a bridesmaid. She carried her sister's train in a form-fitting Alexander McQueen dress that turned her — and her, ahem, bottom — into an internet sensation, leading to a number of interesting fans pages on Twitter and Facebook, People reported. Middleton addressed her newly found fame at an event in 2014, saying, “As I have found out, recognition has its upside, its downside and – you may say — its backside."

But Middleton is much more than just a pretty face (and famous rear-end). She is also a professional writer, an aunt to two — soon to be three — little ones, and on her way to being a mother as well. Her pregnancy and journey into motherhood only adds to the ever-evolving story that is Pippa Middleton. Come October, fans of the royal family will be able to see a whole new side to Princess Kate's little sister.