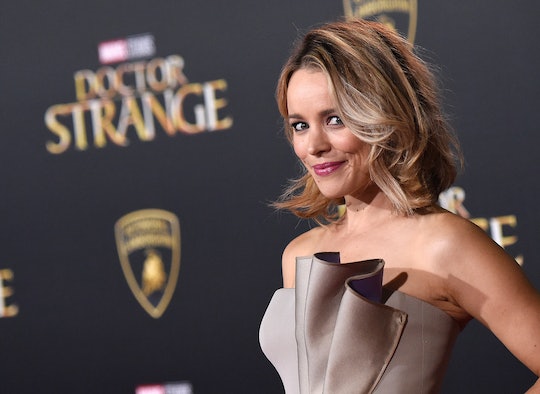 Here's When Rachel McAdams Is Probably Due

"The best love is the kind that awakens the soul; that makes us reach for more; that plants a fire in our hearts and brings peace to our minds." And it also, sometimes, creates babies. Apparently, The Notebook actress and her boyfriend, screenwriter Jamie Linden, are super pregnant — but when is Rachel McAdams due? The rumor is still so uncertain, but fans are guessing that she's due pretty soon.

The Oscar nominee is pregnant, multiple sources confirmed to E! News, though McAdams herself has yet to confirm. The couple was recently seen at Atlanta's Staplehouse restaurant, and she looked "at least seven months pregnant," a local source reportedly told Life & Style. Besides guessing how far along she is — which is pretty uncalled for, especially since all baby bumps are different — the source apparently added that McAdams casually opened up to the stranger about being pregnant. If the reports are true, that would mean that McAdams is due in April... which is right around the corner.

"They were a low-key couple and not outwardly affectionate" during their dinner date, the eyewitness reportedly told Life & Style of McAdams, 39, and Linden, 37. McAdams was supposedly "positively glowing."

Another source reportedly told Hollywood Life last year that the couple was ready to start a family then; they've been dating since 2016, and McAdams has been ready to settle down and have children for a while.

"Rachel is ready to settle down and start a family," the source claimed just before she and Linden moved in together. "She can’t wait to start the rest of her life with Jamie... No one’s ever made [Rachel] feel this way. Jamie’s stolen her heart."

McAdams' last movies were Disobedience in 2017, and Doctor Strange and Sonic Sea in 2016 — so she hasn't really taken a break from business. But she has been rather MIA lately, nonetheless. McAdams hasn't been photographed in public since the fall, Life & Style reported. That's especially odd since she has yet another movie coming out this Friday, Feb. 23 — Game Night, in which she and Jason Bateman play a game-loving married couple.

Game Night has gotten good reviews so far, too. So the alleged mom-to-be apparently has quite a lot to be excited about at the moment. "Game Night is the best comedy I’ve seen in a while, and it will be tough to find a funnier film this year," tweeted Chastity Vicencio, senior producer and host at GameSpot and GS Universe. "It’s full of genuine laugh-out-loud moments from its talented cast... Rachel McAdams is (still) flawless. See it!"

People are certainly excited for McAdams, both for the movie and for the rumor of her pregnancy. But they're also a little heartbroken that she and Ryan Gosling have no more hope of being birds together (even though Gosling already has two daughters, Esmerelda and Amanda, with wife, Eva Mendes, according to People).

"RIP forever.#RyanGosling #RachelMcAdams," one wrote. Another wrote "SO HAPPY FOR HER!!!" And another tweeted,

McAdams has yet to confirm or deny if she is in fact pregnant, according to The Daily Mail. Apparently, she's said that she has social anxiety, so maybe that adds to why she's kept her reported pregnancy under wraps so much. Thanks to her anxiety, "going to a party and talking to a bunch of strangers makes me want to stay home forever," The Daily Mail reported.

In that case, hopefully McAdams' pregnancy and early days of motherhood will be kept respectfully private. Game Night should distract fans for some time, anyway.