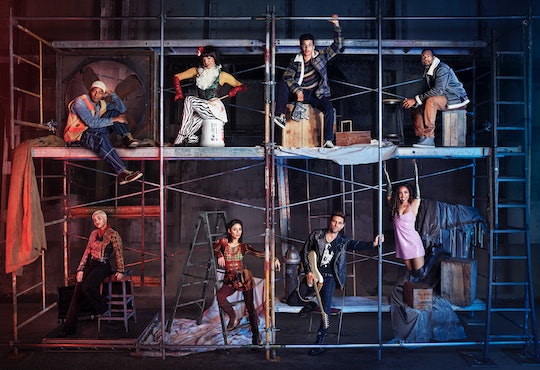 'Rent: Live' Is The Next TV Musical To Look Out For

It's been a minute since a live version of a beloved musical has made its way to television. In recent years, musical theater lovers have seen Hairspray, Peter Pan, The Wiz, and The Sound of Music (among others) arrive on TV. And now it's time for the award-winning musical Rent to get the same treatment. But when is Rent: Live, exactly?

The newest iteration of the hit '90s musical will be airing on Fox on Sunday, Jan. 27 at 8 p.m. ET. It's especially timely because it comes just a few years after the show's 20th anniversary. In the years since its Broadway debut in 1996, Rent has accrued a devoted following who will surely be tuning in to see how Fox handles the live adaptation.

Rent: Live boasts a fun cast of young stars that includes Vanessa Hudgens as self-absorbed artist Maureen, a role made famous by Idina Menzel. Hudgens isn't a stranger to either Rent or the process of performing live on TV: she previously played Mimi in the Hollywood Bowl production in 2010, and also dazzled as Rizzo in Fox's Grease: Live.

Jordan Fisher (whom you might remember as Doody in Grease: Live) joins Hudgens as Maureen's ex Mark, a filmmaker and occasional narrator. Fisher is coming off a jaunt in Hamilton as John Laurens/Philip Hamilton, so he's definitely well-practiced at performing live in front of a crowd. Mark's roommate Roger, a musician and recovering addict reeling from the death of an ex and his own HIV diagnosis, will be played by Brennin Hunt of Nashville.

Tinashe steps in to play Roger's new love interest Mimi, who is also dealing with HIV. An actress and musician, Tinashe has previously appeared on Empire and Dancing with the Stars, on top of releasing two albums. RuPaul's Drag Race star Valentina takes on showstopper Angel, with Brandon Victor Dixon playing Tom Collins. Dixon has some experience with Rent, as well. According to Playbill, he played the same role in the 2011 Off-Broadway revival. He also appeared in The Color Purple, Hamilton, and NBC's Jesus Christ Superstar Live in Concert. He was even nominated for an Emmy for his portrayal of Judas Iscariot.

R&B singer/songwriter Mario rounds out the cast as the group's ex-pal and current landlord Benny. And last, but certainly not least, Kiersey Clemons will play Joanne, Maureen's more reserved girlfriend. Clemons recently starred in the indie music-centric flick Hearts Beat Loud, and will soon be playing Darling in Lady and the Tramp.

In December 2018, Fox released a trailer for Rent: Live that gave viewers their first glimpse of the cast performing "Seasons of Love." Like the stage production and 2005 movie adaptation before it, the actors stood spaced out on stage in their own spotlights, counting out all the minutes in the year in song. It was only a 30-second snippet, but it was a promising sign of how melodic the cast will sound together.

The new version of Rent might be a little different than previous editions (every version is, after all), but it should still deliver every song that fans fell in love with in the first place.