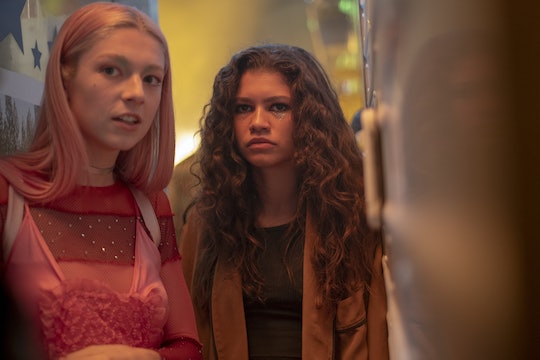 You Haven't Seen The End Of 'Euphoria'

HBO's ultra-scandalous teen drama Euphoria was renewed for a second season ahead of its Season 1 finale, which certainly helped audiences feel less stressed out during the final moments. Any storylines left unresolved might find closure next season, though there may be a lengthy wait before those new episodes arrive. Figuring out when Season 2 of Euphoria will be is a little bit of a guessing game, unfortunately.

Warning: spoilers for the Season 1 finale of Euphoria.

It doesn't look like HBO has announced a second season premiere date, probably because the the first one only just ended. It's doubtful that the creative team has even begun writing Season 2 yet, which makes determining the production schedule a bit trickier; it has to be written, filmed, and edited before it makes its way to your screens on Sunday night. That's a time-consuming process. But if HBO takes a note from the first season, then it's possible the second could debut around the same time next year. The show aired its pilot episode on Jun. 16 of this year, so perhaps Season 2 will follow in June 2020. That's just speculation, of course; they could move up the timetable or shift it back as suits the demands of production. Since the finale is so recent, the show's future plans are still in flux.

At least fans know the show will be back for sure, though it doesn't look like the network is planning for its run to continue indefinitely. While talking to TVLine, HBO president Casey Bloys said, "Well, [the characters] are in high school, so there are only so many seasons it can go. There's a time limit." He conceded that series creator Sam Levinson did not have a particular end date in mind and confirmed that they would be following Levinson's lead going forward. "There is no set plan," Bloys said. "But I don't think you want 30-year-olds playing [high school students]."

He's probably right, but since there's a long tradition of that very thing, I'm not sure audiences would mind all that much. Still, a finite ending would suit the show's narrow focus on the complicated dynamics of high school; once its characters age out, Euphoria would likely become a very different series. But since many of the characters are already 16 or 17 years old now, there could only be a few more seasons of the show before they would graduate. Riverdale's eternal high school this is not.

It's a good thing Euphoria's future is assured, because Season 1 ended on quite the cliffhanger. Nothing was really resolved: Fezco might be in deep with some scary dealers and Nate still hasn't faced justice for every ill deed he's done (and there have been a lot). But, most importantly, Rue and Jules have had a real fracture in their relationship. When Rue backed out of their plans to run away together, Jules went through with it anyway and it's unclear whether she'll be coming back or not. Meanwhile, Rue relapsed, ending the season almost exactly where she started it.

There's still so much to explore with these characters in a second season. The only trouble is, fans will have to wait before finding out what happened to them. Euphoria will return, but the exact date is still uncertain.