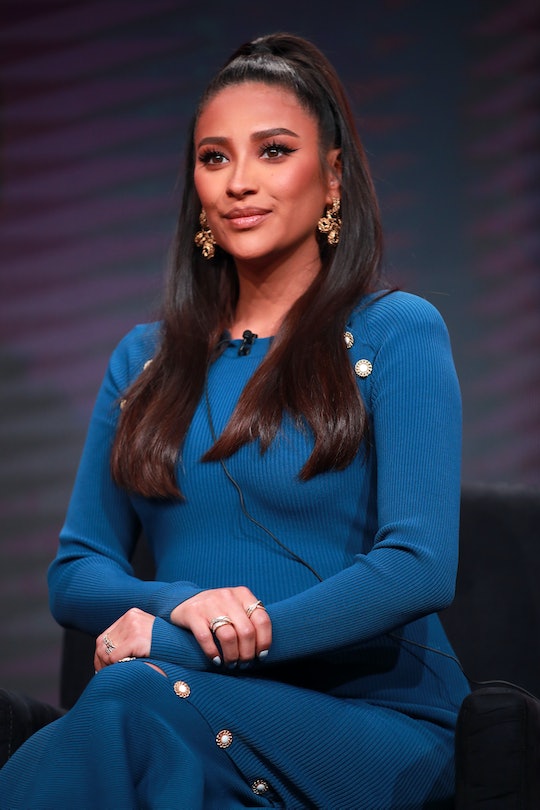 Shay Mitchell Reveals Her Due Date Is Right Around The Corner

Fans waiting for baby news from Pretty Little Liars alum, Shay Mitchell, got what they wanted over the weekend when the actress appeared in a Q&A livestream with her partner, Matte Babel. The couple answered many pregnancy-related questions from fans and revealed Shay Mitchell's due date. As it turns out, Mitchell's child will be here sooner than you might think.

Mitchell and her boyfriend, Matte Babel, announced the baby's due date during a YouTube livestream on Sunday, Aug. 18. It looks like the party of two will become a party of three sometime in late September or early October, according to E! News. Although it isn't a solid timeline, it still means that Mitchell will be giving birth soon, which is pretty exciting.. And the parents-to-be seem very thrilled about the baby's future astrology sign.

"Matte is so set on her coming out and being a Libra," Mitchell said during the livestream, according to Harper's Bazaar, while Babel continued, “I want her to be a Libra because then, while I’m outnumbered in gender, [we’ll be] similar in terms of personalities.” Babel is a libra, while Mitchell is an Aries.

Even before the couple announced their due date in their YouTube livestream, fans had their guesses about when to expect the baby due to one key phrase in June 28 Instagram post from Babel. The dad-to-be posted a beautiful black-and-white side profile photograph of the You star on Instagram with the caption, "Watching the both of you grow over the past 6 months has been the most beautiful thing in the world. The strength, vulnerability and grace you’ve had during this pregnancy has left me in awe, you’re going to be an incredible mom... We’re lucky to have you, love you." Considering Mitchell was six months when the photo was taken, the late September or early October lines up.

Speaking of Babel, Mitchell said that he has been doting on her throughout the entire pregnancy. “[He gives] massages,” Mitchell said, while promoting her new Hulu show Dollface, according to Us Weekly. “Not very long ones, but I’ll take them when I can get them. He’s … supporting my wants to continue working throughout this whole process, so that’s always good.”

And in July, Mitchell and Babel debuted an epic Power Ranger themed sex reveal video in which the Blue Power Ranger fought the Pink Power Ranger, according to Harper's Bazaar. The Pink Ranger won, announcing to fans that the couple is expecting a baby girl.

"It's kind of surreal processing the fact that another human is growing inside of you. It's exciting, nerve-racking, difficult and emotional all at the same time, Mitchell said in the description of her YouTube video announcing the news. "We're beyond excited and looking forward to starting a family. I've learned so much about myself and parenthood over the past 6 months, and feel like I haven't even scratched the surface!"

Baby Mitchell-Babel is still a few months away from making her debut, but fans can enjoy the mom-to-be's Instagram feed in the meantime. Mitchell has been posting throughout her pregnancy with everything from images of herself on vacation in a bikini to spreads of her favorite food cravings. But supporters will have to wait until the fall to find out the final details, including the baby's name, which will no doubt be announced on social media too. Stay tuned!

More Like This
14 Free, Printable Birth Plan Templates For Every Kind Of Delivery
40 Fantastical Boy Names That Start With “F”
7 Surprising Old Wives' Tales About Christmas Eve Babies
Yes, It’s Possible To Get Pregnant If You Have An IUD