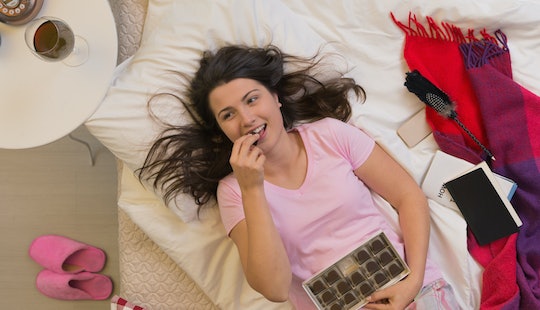 Single People Get A Holiday Too & It's Just Around The Corner

A lot of us may be yapping on about Valentine's Day, the dinner dates, and floral gifts we hope to receive from our significant others, but what about those who don't have a romantic interest to celebrate with? Singles Awareness Day is just as fun, and it's coming almost as quickly as that sappy love day. When is Singles Awareness Day? Get ready, it's just around the corner and you'll want to shower your single friends with love.

There's even a website (albeit a little sparsely designed) and a hashtag for the holiday. SinglesAwarenessDay.com reminds readers, "The goal of Singles Awareness Day is to let singles have celebrations, get-togethers, etc. and to exchange gifts with their single friends. The awareness day was established by single people who were just sick of feeling left out on Valentine's Day, and support of the day is growing every year."

Days of the Year corrected the record on Singles Awareness Day by explaining that the day isn't meant to be about self-pity because you don't have a date. Instead, it's about celebrating your single-ness and independence, "Originally, most singles referred to February 14 as Single’s Awareness Day (acronym: SAD) until it they realized that that was just depressing. Choosing the next day allowed single people a chance to turn this into a celebration rather than a festival of self-pity."

Wondering what one does to commemorate and celebrate Singles Awareness Day? Well, we have some ideas for you. Days of the Year explained that people celebrating SAD sometimes wear green, because it's the complementary opposite of red, or black, because it's the absence of color. Sometimes singles send each other gifts or flowers, or sometimes they just camp out altogether.

Brazil is a popular destination for those celebrating SAD, said Days of Year, because they don't celebrate Valentine's Day on February 14th but instead happen to be celebrating Carnival at that time. That's much more fun than scurrying around looking for the last heart-shaped whatever at the convenience store at 9 p.m. on February 13!

The holiday's official website had a few more unique ideas for celebrating SAD, including sending flowers to yourself with a blank card to perplex your office-mates and then giving away the flowers on your way home to those who look like they are feeling a little down in the dumps.

They also suggest looking outside yourself on the holiday, and finding someone you could visit in a hospital or nursing home, who might not have anyone to celebrate with. They brought up the idea of bringing them flowers or a goodie basket to show them a little extra love on the day, but "be sure to have some tissues as it could turn into a teary experience for both of you."

How long has Singles Awareness Day been celebrated? Well, that's hard to know, but according to Holidays Calendar, it "has been celebrated since around 2005" and was likely started by someone single who was sick of being excluded by the Hallmark holiday. The site reminded everyone, "However you want to celebrate this holiday is completely up to you and there isn’t a right or wrong way to do it." That's my kind of holiday!