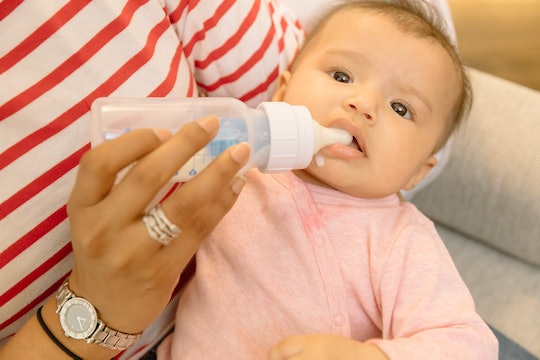 Spit Happens, But Here's When Your Baby's Spit-Up Is An Actual Issue

Babies spit up. It's just one of the things they do. Maybe they've eaten more than they can hold in their tiny tummies. Maybe it happens when they burp or drool — it's not always consistent. Some babies do it a lot more than others, too. While my son hardly ever spit up, my daughter did it a lot more often and it seemed like a spell of bad luck for a while. How much is too much, though? When is spit-up a problem?

About half of all babies will spit up at least once before they're 4 months old, according to The Mayo Clinic. It happens when the lower gastroesophageal sphincter (a muscle that looks like a cross between a flap and automatic doors) fails to close properly, and the contents of the stomach make their way back up baby's esophagus and out. Usually, it's not that much fluid — just a few tablespoons — even if it seems like much more. It's rarely a cause for concern, according to the American Academy of Pediatrics (AAP), but certain abnormalities such as discolored spit-up or the failure of a baby to gain weight properly indicate a possible problem that should be monitored and treated by a pediatrician.

I spoke with pediatric nurse practitioner, Joy Diamant, author of the upcoming book Don't Freak Out, It's Probably Nothing, and asked her about when you should worry about your child's spit-up. She tells Romper that the rule of thumb is that the spit-up should be the same color as the formula or breast milk, possibly with streaks of clear mucus, especially if they have a cold. Your baby should also still eat regularly, seem healthy, and gain weight normally.

"If your baby's spit-up is yellow or green, that needs to be assessed by a pediatrician. If it looks like coffee grounds in the spit-up, that's a medical emergency. It's called hematemesis, and while there are several possible reasons for it, most highly treatable, it's caused by coagulated blood in the stomach, and usually predicates a trip to the emergency room, guided by your pediatrician or NP," Diamant says.

She also explains that if it seems projectile or heavily forced, you want to put a call into your provider, because at that point it may be vomit and not spit up. "There's a difference between spit-up that flies and spit-up that's forced. Check your baby's face. Do they look like they were forcing the spit-up? Are their eyes watering? Is their face red?" These are hints to whether or not your child is vomiting forcefully.

"There shouldn't be any blood in the stool, either." Diamant says it might seem counter-intuitive to look at poop when you're evaluating puke, but it's the same system. Because of the connection, the symptoms may be present in both places. She also adds that "if your baby ever has trouble breathing when they spit up, looks sick, feels limp or warm, call your pediatrician or 9-1-1 immediately."

Diamant says that more often than not, spitting up isn't a big deal. If they're still healthy, hale, and gaining weight, it's probably nothing. If it starts after they're 5 or 6 months old, call the pediatrician and get your baby seen, just to rule anything out. Occasionally, as in the case of my son, never spitting up can also be a symptom of reflux. He just couldn't spit up anything, and it ate his poor little throat. It was pretty scary when he was trying to work up a burp or spit-up, so much so that at one point we took him to the emergency department because we thought he might be having a seizure. It turned out fine, and as long as he slept in an elevated position, he felt good.

If your baby's spit-up is worrying you, call your provider. They can walk you through any questions you have and allay your fears. However, mostly, spit-up is just inconvenient and messy, like sharing a bathroom with your spouse. It's just life.

More Like This
Abbot's Formula-Producing Plant Can Reopen In As Early As 2 Weeks — Now What?
22 Instagram Captions For Pics Of Your Baby Trying Solid Food For The First Time
12 Genius Floats With Canopies (& Cupholders), So You Never Have To Leave The Pool
Here’s What You Need To Know About That Viral 1960s Baby Formula “Recipe”