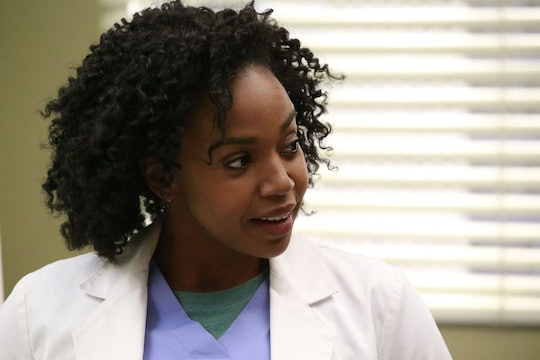 Edwards Had A Difficult Night On 'Grey's Anatomy'

Since arriving at Grey Sloan Memorial Hospital, Stephanie Edwards has been the doctor to beat. Smart, confident, and willing to do whatever it takes to succeed, she's like the Cristina Yang of her resident class, which is why it was disappointing to learn that Jerrika Hinton, who plays the character, is gearing up to leave the show. So when is Stephanie Edwards leaving Grey's Anatomy? She'll be around for the rest of Season 13, but after that her role on the show is a bit up in the air.

Hinton will not be back as a series regular in Season 14, TVLine reports, but that doesn't necessarily mean she won't be on the show at all. Earlier this year Variety announced that Hinton was cast in HBO's upcoming Alan Ball series as a guest, however that could turn into a bigger role. It's most likely due to this new gig that Hinton is taking a step back from Grey's, but does that really mean Stephanie's saying goodbye for good? That'll probably most likely depend on what becomes of Hinton's new role.

For now, though, I'm hoping Stephanie will continue to be on Grey's, even if it's just in a guest starring role. Stephanie has been a part of the show since Season 9, when she joined the cast as an intern. At the start she was mostly remembered as being Jackson's girlfriend, but since then, she has become so much more than that. Honestly, sometimes I forget she and Jackson even dated.

However, based on Thursday night's episode, it looks like Shonda Rhimes may be setting up Stephanie's permanent exit. After Eliza let Stephanie take the lead on a peds surgery, the poor boy ended up dying on the table, leaving Stephanie visibly shaken. Though Dr. Webber was able to comfort her and help her tell the devastating news to the child's parents, it was obviously a harsh, eye-opening experience for the young doctor. Could this be what throws Stephanie off track? I surely hope not.

Stephanie has come so far and has done and learned so much at the hospital. She's clearly the best resident and if she has to go I hope it's to do something amazing. Maybe she can join Shane and work with Cristina too. For now, I'll just enjoy whatever time I have left with my favorite resident.