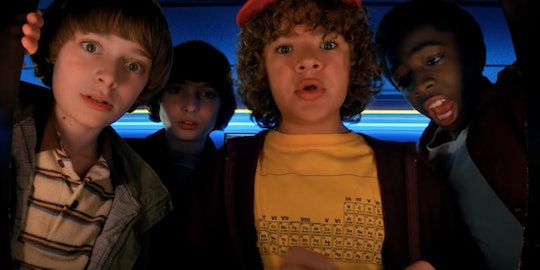 Stranger Things Day Is Coming, & Here's How To Celebrate In The Upside Down

Calling all Stranger Things fans! Netflix has declared Nov. 6 as Stranger Things Day. I think we all realize this is nothing more than a clever marketing ploy to keep fans like myself interested and excited about the continuing story of the kids from Hawkins, Indiana. But, umm... can I admit that it's totally working? The uber-popular science fiction horror series is one of my favorites, and I really did not expect that they would film another season (especially with, SPOILER ALERT, the alleged devastating loss of Sheriff Hopper). But, thanks to a pretty intriguing cliffhanger at the end of Season 3, I've been left to check the ol' internet frequently for a Season 4 Stranger Things release date (and so far, crickets). In the meantime, I'll look at photos of everyone who's likely dressing up as a Stranger Things character for Halloween, and at least we have Stranger Things Day ahead.

And what should fans do to celebrate Stranger Things Day, you may wonder? Well, according to the show's Twitter account, basically any thing you want, as long as you're paying homage to the series on Nov. 6, which marks the fictitious 36th anniversary of Will Byers' disappearance into the Upside Down. Here are some examples, nerds: you can try your hand at translating a secret Russian code, hang a few Christmas lights (a little early, but OK), and just try to spell "America" without "Erica". Go on, try. Want to eat an Eggo or two for lunch? Thanks to Eleven, that's perfectly acceptable on Stranger Things Day. Also, maybe a game of Dungeons & Dragons?

You get the picture, with or without the sailor outfit. And obviously, if you do decide to celebrate Stranger Things Day, tag it on social media and you might just get re-posted. Pretty hilarious, right?

Speaking of funny, the fact that I love this show is sort of ridiculous, because on paper I am not the target audience for a series like Stranger Things. Like, not even in the slightest. I have never been able to sit through a horror movie, and while I enjoy a little suspense, anything with aliens or mysterious creatures (I'm looking at you, gorgon) is not my cup of tea. I think the fact that I just wrote "cup of tea" should solidify what I'm trying to illustrate here. And yet, I love the show, which is thanks mostly to an incredible writing team led by the Duffer Brothers, a cast of appealing characters, and throwbacks to all the best things I remember about the 1980s and '90s. Stranger Things is also really funny, which you might not expect in a series about a child being kidnapped by a mysterious monster, an alien girl with the power of Telekinesis, Russian bad guys, and plenty of murder and mayhem to have me looking through my fingers half the time.

I suppose that's the power of a really engaging cast, though. I believe in these scrappy, clever kids, who I, along with thousands upon thousands of fans, have literally watched grow up since Season 1. We'd all kind of like for Dustin, Will, Eleven, and crew to catch a break from the strange dark forces that plague them, but that would mean, of course, that the show has to come to an end. Fortunately, there's more good news on that front. Entertainment Weekly reported that Stranger Things will likely go on for two more seasons. After that, it will be time to finally say goodbye to the kids from Hawkins, Indiana. Stranger Things is currently streaming on Netflix in case you haven't seen all three seasons yet (because you know, you should). "Friends don't lie," as Eleven would say.