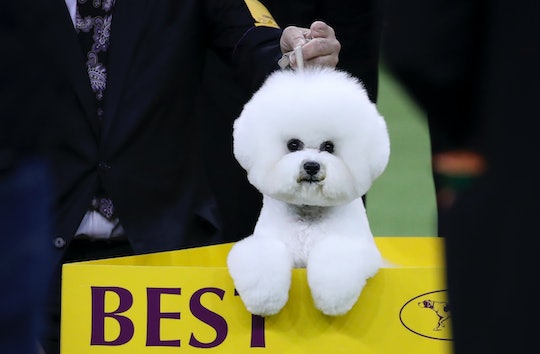 The Westminster Dog Show Is Just Around The Corner, So Cancel All Your Plans

Ever since watching the Puppy Bowl during the Super Bowl, I've been jonesing for more dogs on my screen. So naturally I had to be looking up when the 2019 Westminster Dog Show is because that's one timeless canine competition that always entertains. With its well-groomed contenders, committed handlers, and legendary commentators, the Westminster is seriously fun, and oftentimes funny, to watch.

The 143rd Westminster Dog Show will take place in New York City on February 11 and 12, and will be televised on Fox Sports 1 (FS1), Nat Geo Wild, and the Fox Sports Go app, according to Sporting News. Whether you're an avid dog lover or you just love a high-stakes competition, the 2019 Westminster Kennel Club Dog Show promises to be viewing gold. You can watch 193 breeds of dogs compete during this 2-day-long competition that all culminates in the 'Best in Show' event (airing live on February 12 at 7:30 p.m. Eastern Time on FS1), according to the American Kennel Club.

Like every Westminster Dog Show, this year promises to be one fierce competition, with some owners spending thousands of dollars on training and grooming for their show dog, according to Time Out New York. And if you want to watch the action in person, it can also cost you a pretty penny, with tickets ranging from $10-$190.

Even if you're not totally canine-obsessed, there's another big reason to tune into the ultimate dog showdown this year. Thanks to the Purina Pro Plan $1 Million Westminster Kennel Club Dog Show Bracket Challenge, you could win a serious chunk of change. The challenge is similar to March Madness, explained People: You pick out the canines you think will be the top contenders in each of the Westminster's seven groups, as well as the overall winner of 'Best in Show'. If you select all the canine champs, you could win $1 million.

Just note, you need to have all your predictions in before the Westminster show starts if you want a chance at taking home the big bucks. To enter, you must enter your picks on Purina Pro Plan’s website by February 11 at 5 p.m. Eastern Time.

Choosing your pooch picks might be a little challenging with so many ferocious competitors going tail to tail. More than 2,800 dogs will participate in this year's Westminster show, explained a Purina Pro press release. Fortunately, there is an "expert" that just might be able to help. Nick Lachey, the easy-on-the-eyes 98 Degrees former frontman, has teamed up with Purina Pro to be the official "Barketologist," according to the company press statement.

Lachey selected a Siberian Husky as the breed he hopes will take home the prestigious 'Best in Show' title. "I grew up with a Siberian Husky, so for me, I try to make all my picks kind of personal," explained the dog lover, in a video interview with People.

However, Lachey's odds might not be all that great. A Siberian Husky has only won 'Best in Show' once since the award began back in 1907, according to the Westminster Kennel Club.

No matter what breed of dog you're predicting will take home the coveted Westminster title, you can rest assured there will be plenty of showmanship from all of this year's competitors.