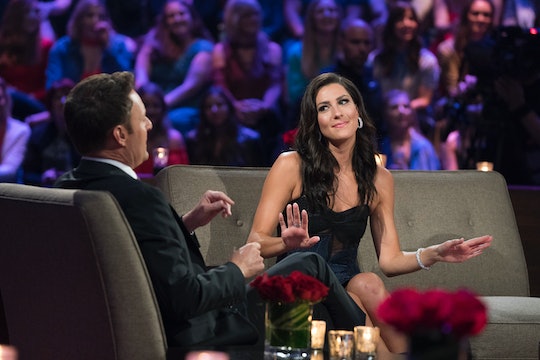 Becca's *Journey* Is Almost At An End

All good things must come to an end, and sadly that includes Becca's season of The Bachelorette. It feels like just yesterday that she was getting her heart broken in front of millions of strangers, and now she's choosing her husband. So, when is The Bachelorette finale? Fans will finally see if she chooses Blake or Garrett to be her fiancé.

The Bachelorette finale airs on Monday, August 6, along with the After the Final Rose special. If you're wondering why there's a gap week, it's because the Men Tell All special s airing Monday, July 30 instead. Now, I'm actually excited for Men Tell All because it's a chance for Becca to reunite with all her exes (well, except the runner-up — that's what After the Final Rose is for) and get some closure.

Not only will Becca come face-to-face with the more dramatic contestants this year, like Chris R. and Jordan, but contestants like Joe the Grocer will be in attendance, too. Furthermore, Jason will definitely be there, and as the third place finisher, I'm sure he and Becca will have an emotional heart-to-heart on stage.

Because it is about that time in the season, there's a lot of buzz over whether Jason will be The Bachelor. And honestly, he seems very much up for it. According to an interview with People, Jason is open to being the next Bachelor. He said he is "very single" and, "Coming into The Bachelorette, I always led with a calculated mind and not an open heart ... Now, I’m able to start leading with my heart and not my head. And I’m in the best position to find who I’m looking for now."

Well, while Jason would indeed make a great Bachelor, fans have to wait a bit until they find out if he gets the coveted spot — and I'm talking about beyond The Bachelorette finale. Unlike how The Bachelorette is revealed during The Bachelor's After the Final Rose special, fans don't get that instant gratification this time around. Last year, Rachel Lindsay's Bachelorette season ended in August while Arie Luyendyk was announced as Bachelor in September. So, yeah, we're all going to have to wait a little bit even though this season will be over before we now it.

But fans of The Bachelorette can relax, because while they may have to wait until September to find out who the next Bachelor is, the next season of Bachelor in Paradise begins Tuesday, August 7 — yup, the day after The Bachelorette airs. ABC doesn't give Bachelor Nation much of a break between shows and that's one of the reasons I love them. Furthermore, we still have not only Men Tell All to look forward to, but After the Final Rose, which is even juicier because both the winner and runner-up are also in attendance.

As Bachelor Nation knows, Becca did not have a good After the Final Rose last time around. During Arie's finale, fans learned that Arie broke up with Becca because he was still in love with Lauren, his supposed runner-up. Not only that, but Arie proposed to Lauren on After the Final Rose as well. Granted, Becca was announced as The Bachelorette then, so I'm sure she didn't feel 100 percent terrible, but it seemed definitely bittersweet. This time around, I hope she gets the ending she wants to get and that she deserves. This Bachelor and Bachelorette cycle has been historic. I know they say that every year, but this time is true. I'm sad it's coming to an end, but I can't wait to see who Becca picks after all is said and done.