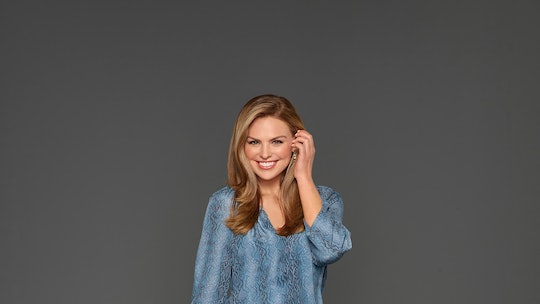 Hannah's season of The Bachelorette is nearly over but it's hard to predict how it will end. The "Men Tell All" special, including (what else) more Luke drama, further complicated the former pageant queen's journey, leaving fans to wonder which contestant will leave with the final rose. If you've been with Hannah since the Colton situation, and you just want to know when The Bachelorette finale is, you're in luck. It's almost here and it is, as always, "the most dramatic finale in Bachelor Nation history." But for real this time.

The two-part four-hour finale (wow) of The Bachelorette airs Monday, July 29 and Tuesday, July 30 at 8 p.m. ET on ABC. Filming took place in Greece around spring time, so just a few months ago. And of course, fans have plenty of questions and theories about how this is all going to go down.

For starters, is Luke P. gone for good or will there be another surprise waiting for Hannah at the final rose ceremony? Logic says he can't possibly, but history proves he can possibly. The promo shown at the end of the Men Tell All Special doesn't show any sign of Luke P., but does reveal a very stressed out Hannah. I feel ya, girl.

With Tyler, Peter, and Jed left, the promo shows Hannah's dad, Robert, weighing in with some sage fatherly advice, "I don’t want you to settle for anything." In another clip, her mom, Susanne, says she only wants Hannah to find someone who will love her the way she deserves to be loved, which could indicate none of them have proven they're capable. Could this mean Hannah leaves alone? Ugh. The anticipation is killing me.

It's clear in the video Hannah struggles with the decision — one that is further complicated by rumors that circulated after filming about frontrunner Jed and his supposed girlfriend. He hasn't yet said much about it, possibly due to contractual obligations, but all will come out soon enough. Host Chris Harrison told People he, too, is excited to see how the whole thing pans out. Jed will finally address the rumors about the woman who went public with her story during the finale. "There’s a lot of things being said. I think she has narrowed it down to three good guys," he said. "I know how it ended in Greece, but I don’t know how this is going to end up for her."

No matter what Jed says during the live portion of the finale, Hannah still has to send one of her fellas home, narrowing three to two. If she eliminates Peter the adorable Pilot, the internet will likely protest. If Tyler C. is next to get the ax, I will likely protest. If she sends Jed home, his mom will probably protest. It's down to the nitty gritty, with no time to mess around. 30 men down to one is quite a feat. So the real question is, who can Hannah see herself married to, long past windmills and naked bungee jumping?

Both Chris Harrison and Hannah said the finale will be unexpected. Could this be another "Colton jumps the fence" situation? Better? In an interview with Entertainment Tonight, Hannah mentioned the season didn't go the way she thought. "It doesn't mean that it's not good," she said. "I think it happened the exact way that it was supposed to, and I feel really excited and blessed to have the opportunity that I've had and feel really good and want you all to see what that is." This means the finale will bring the drama front and center and I'm here for it.