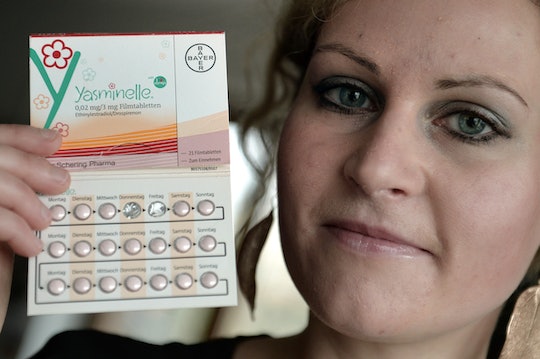 When Is The Best Time To Take Your Birth Control?

All over America, women pop birth control pills without really knowing how they work; just that they work. And for many women, the fact that the pill keeps them from getting pregnant is enough information. But, it's totally valid to investigate when is the best time to take your birth control because in this case, timing is really important.

You might not wake up at the same time everyday, so as Go Ask Alice suggested, an alarm set specifically for your birth control can help you remember to take your birth control. Another thing to consider: how do the hormones in the pill make you feel? Some women report feeling nauseated if they take the pill on an empty stomach, which might make afternoon a better time for you to take your pill. For others, nausea is not an issue. Your body, your choice.

You should know, however, that what type of birth control plays a role in when you should take it. There are two kinds of pills, the progestin-only pill and the combination pill that contains progestin and estrogen, the latter of which is the most popular according to Besider. But despite the differences, both pills keep you child-free by preventing ovulation, stopping your body from releasing an egg during your cycle for a sperm to fertilize, according to Medical Daily. The site also noted that release of these hormones thicken cervical mucus to create a sperm barrier and thin the uterine lining, (so the uterus can't support a pregnancy, if an egg "slips" out). Hormones — pretty cool, right?

OK, here's the big difference — it's important, so pay attention: Because progestin only stays in the body for about 24 hours, time is really of the essence with this kind of birth control. If you take the pill three hours later than you usually do, according to Planned Parenthood, you should use a back up method for 48 hours, and follow the instructions on what to do is you miss a pill.

If you take the combination pill, both Planned Parenthood and Besider recommended that you still take the pill at the same time daily to keep it part of your routine, which I covered already, so just do that, K? Thanks.

Give your routine a trial run. Take note of how you feel and run your plan by your OB-GYN to be extra safe.