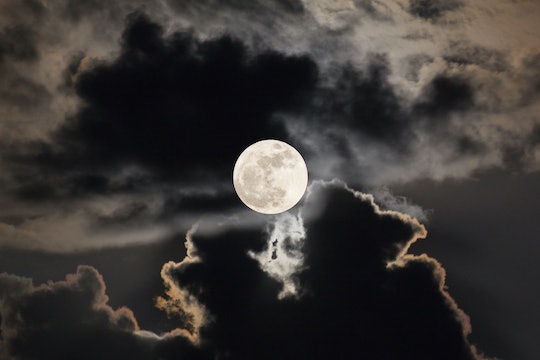 If You Want To See The Full Cold Moon In All Its Glory, Here's When You Need To Head Outside

There is only one supermoon occurring during the whole of 2017, and that's this Dec. 3. This year is really going out with a bang — and it's not just the sound of my credit card exploding from buying Christmas presents. The full cold moon of December will be shining down on shoppers, children, and curmudgeons alike. With this being our only opportunity to see a supermoon this year, you might wonder, when is the best time to view the full cold moon?

More Like This
Is The Tooth Fairy Real?
Say Everything You've Always Wanted To Say With These 13 Father's Day Poems
A Guide To Apple Card Family
The 7 Best Water Tables For Your Little Ones

Because of the return to standard time, the full cold supermoon is at its brightest before most of us even leave our offices for the day. According to Space.com, the moon will be its brightest at 4:47 p.m. However, the moon will remain eerily bright and large for the remainder of the night and into the wee hours of the morning. Supermoons appear to be up to 30 percent brighter and nearly 15 percent larger than your typical full moon, and the craters are more visible during the super moon than during any other time in the lunar cycle. Also known as The Bitter Moon, the full moon of December is so named because of the cold weather which coincides with the date.

I remember sitting in cosmology class as an undergrad and listening to my creepy old professor tell stories about all the mythology surrounding the moon. For instance, I had no idea that people thought that the Nazis had a base on the moon a full 25 to 30 years before Neil Armstrong and Buzz Aldrin would step foot on the moon's surface. How people thought that would work, I have no idea. I mean, it pretty much exists in a vacuum, and is completely dull and grayish white, so it suits their views, but how'd they get there? Although, we may want to look into how we can ship the current lot of neo-nazis to outer space. Get on that, rogue NASA.

Also, did you know that there are people (probably 15 in total, and they all live in their mother's basements and troll Twitter) who think the moon is a legit Death Star like space station? Yeah, they think it's an actual hollow sphere that houses aliens. Maybe you can see the portholes or laser apparatus during the supermoon. I have no idea if there are ewoks, but I'm willing to give it a gander and check it out.

When is the best time to view the full cold moon if you're looking for extraterrestrial activity? Thankfully, I know a physicist in New York City who was willing (and obligated because he wants me to make Christmas cookies for the office we share) to answer all of my completely ridiculous questions. Brian Egan, PhD of Queens, New York tells Romper via text message filled with super fun gifs that "if you're going to see an alien spaceship on the moon, you would see the spaceship at moonrise on the supermoon, which is at about quarter of five on Dec. 3." When pressed about the existence of potential ewoks on the moon (again, with ewok gifs), Egan tells Romper, "You'd have to ask George Lucas."

Finding his answers really unsatisfactory, I asked him when and where is the best time to view the supermoon. He says, "The best time is around moonrise, or barring that, whenever it's darkest in your area. If you want to be blown away by the sight, your best bet is to go to an unpopulated area with little light pollution and hope there aren't any clouds. In the city, we don't get the full impact of the moon because of all of the smog and light pollution, but it's something else when you're far upstate in the middle of nowhere." There you have it — get there at moonrise, and be where it's really dark.