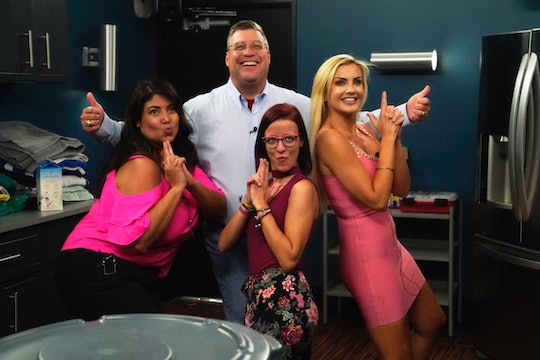 The 'Big Brother' 21 Jury Is Just Getting Started

On Big Brother 21, the first member of the jury heads to a secluded location after the live elimination episode on Aug. 8. So, I know you're already wondering when the Big Brother live finale is — because I definitely am. One can only take so much drama about who secretly met at Stagecoach and plotted to take over the Big Brother house. What if they were just enjoying Luke Bryan?

Well, when fans finally learn the winner of Big Brother most kids will be back in school, leaves will begin changing color, and pumpkin spice lattes will have taken over. CBS announced in June that the Big Brother 21 live finale will air Wednesday Sept. 25 at 9:30 p.m. ET after the Survivor Season 39 premiere.

It's anyone's guess who will be sitting in those final chairs on finale night, but fans already know some people who won't be. On the Aug. 8 live show either Jack or Jackson aka "Michie" will become the first member of this season's jury. Current HOH Jessica took all of the power for the week when she won the veto competition and decided to keep her nominations the same.

It was the only logical choice she could've made, because both men were part of the "Six Shooters," a majority alliance in the house that she was not a part of. Fans on Twitter are ecstatic about her decision, as they should be.

Trust me, I understand how exciting this is. I love seeing underdogs take power back, and Jessica and her de facto allies, Kat, Nicole, and Cliff, should relish in it while they can. But after Thursday's live eviction they need to focus again because there is a long way to go before finale night. More obstacles than the five surviving members of the Six Shooter alliance stand in their way.

Big Brother's motto is "expect the unexpected." Usually that means there are at least two double eviction nights and a few competitions that force contestants to choose between power and prizes like vacations. Season 21 is camp-themed, so this year there is also an "America's Field Trip" game that gives fans the power to choose three contestants to battle each other in an unknown competition.

The winner is safe for the week, and the person who finishes last automatically becomes a third nominee. Power and punishment is at stake, but it's impossible to predict who will win or lose.

Based on tweets, America is trying their collective best to strategize about who to send on this trip while also keeping Jessica and her allies safe. But voting closes soon and has been going on for about a week, so I'm not even going to attempt to guess an outcome.

The moral of this post is that there is still so much Big Brother left to play, but America seems to want Jessica and one of her allies in the final two chairs in September. I stan Latinas who take their power back.