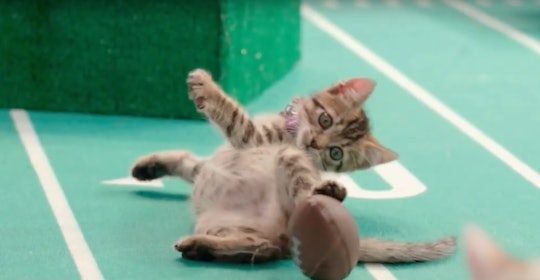 The First Ever Cat Bowl Is Around The Corner, So Here's Everything You Need To Know

If you're a fan of cats, the Hallmark channel, great causes and just generally cute TV that makes you smile and coo and want to adopt an entire litter, you're in luck, because the most epic annual television event for feline lovers is just around the corner. So when is the Cat Bowl? According to the Hallmark Channel, it's coming up soon.

For clarification, the Cat Bowl is a bit different from the Kitten Bowl, which has gained popularity in past years. The Kitten Bowl showed off the athletic inclination of different baby cats as they were filmed playing with each other and toys. (It's adorable, trust me.)

However, this year, Hallmark is making a new spin on the event, in light of the fact that there are often many adult cats that go unadopted given that more people are interested in getting kittens. That's why Hallmark is airing the Cat Bowl on Saturday, Feb. 2, at 10 p.m. EST, featuring animals who need homes.

"With Hallmark Channel's partner North Shore Animal League America, Cat Bowl' and companion program 'Kitten Bowl' will be a part of the biggest pet adoption event in the country," the site reads. "More than 500 shelter partners will showcase local animals available for adoption from February 2-February 16."

This year, the show will be hosted by Beth Stern, who is a TV personality, author and animal advocate. She will reportedly be joined by Hallmark star Alison Sweeney and Cameron Mathison to narrate all the action. The event will also feature a "Where Are They Meow" section, during which the hosts share where former Kitten Bowl athletes ended up after their adoptions.

Stern, in particular, has been outspoken about the advocacy work she does for cats and kittens, at one point explaining that there's often a shortage of families willing to adopt the surplus of kittens born each year — and then, of course, the adult cats that are never picked up, and could end up at euthanizing shelters.

"In the animal welfare community, there's a time of the year known as 'kitten season,' the period between March and November when the greatest number of kittens are born. It's a tough, stressful time for shelters everywhere," Stern told Biography. "So as kitten season approaches every spring, I help local municipal shelters by taking those kittens who are in danger of being euthanized, due to overcrowding and the enormous numbers of cats and kittens inundating shelters."

She went on to explain that she and her team work to gather litters of kittens, and place them at a safe shelter in which they can be evaluated and taken care of medically. Ideally, they'll also end up in a new home, but that doesn't always happen.

The cats being featured at the Cat Bowl will all be spayed, neutered, vaccinated and ready for adoption. If you choose to tune in throughout February — whether you're an aspiring pet owner or just someone looking to add more kitten content to your life (and TBH, who isn't looking do to that) it should be a pretty amazing time overall. We'll have to wait until next year to see if the tradition sticks, given that it's the network's first annual go at the event, but I'm thinking it's looking pretty good so far. Could this be the new Shark Week? Who's willing to place bets?