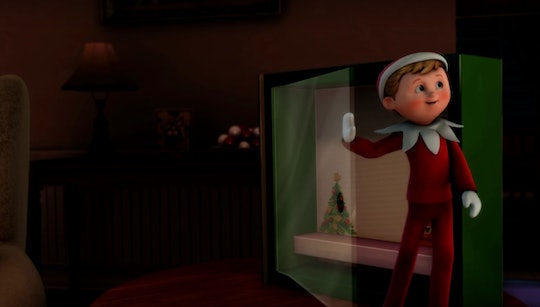 When Is 'The Elf On The Shelf: An Elf's Story' On TV This Year? It's Coming Soon

Christmas is right around the corner, and moms are officially busting out the "Santa's watching" reminders to keep kids in check during the holiday break. That means the Elf on the Shelf is back in business, helping Santa find out who's naughty and nice. But besides the book, and the doll, there's also an animated special that's helping kids of all ages gear up for the big day. When is The Elf on the Shelf: An Elf's Story on? You're not going to want to miss it.

The Elf on the Shelf: An Elf's Story has all the makings of a Christmas favorite. The story follows a young boy named Taylor McTuttle who's facing the age old question: Is Santa real? In comes Chippey the scout elf, who is assigned to Taylor's house to help him rediscover the magic of Christmas. Except Taylor breaks the first rule of Elf club: don't touch. So, when Chippey loses his magic, the two become an unlikely pair as they discover that Christmas magic lives inside everyone; all you have to do is believe.

The half-hour special will be aired on Cartoon Network, TBS, and TNT a few times between Thanksgiving and Christmas:

For up to the minute updates, which will help make sure you won't miss an Elf on the Shelf-related thing, follow @elfontheshelf on Twitter.

You can also watch the special on Netflix, Amazon Prime, or simply buy a digital copy from iTunes or a physical copy from Target or other retailers.

If you can't get enough after watching The Elf on the Shelf: An Elf's Story, you might want to check out Elf Pets: Santa's St. Bernards Save Christmas. When a entire town loses its Christmas spirit (gasp!), Santa send in a special crew of scout elves and their magical St. Bernards. Together they make things right, ensuring that the magic of the season lives on for all to enjoy. Catch it Dec. 3 at 6:30 p.m. EST on Cartoon Network, as well as several other times throughout the holiday season. For a full schedule, check here.

If you're not familiar with the Elf on the Shelf concept, here's the deal. These elves are Santa's scout elves, and they're sent to homes all over the world to observe and report back to Santa so he can properly compile his famous naughty and nice list. Each night, the scout elf returns to the north pole to give Santa the deets. When they return, they perch themselves in a new spot, waiting for the children to find them the next morning. But you can never touch them, or they'll loose all of their magic.

So how do you get your own Elf on the Shelf? Long story short, you have to buy them. They come in their own little box with an accompanying story book. And once you name your elf, they're yours forever. You can also buy your elf special outfits and a pet. While it might seem like another Christmastime commercial ploy, kids really seem to love these little elves. In fact, it might help them indulge in the idea of Santa a little longer. And with the world the way it is right now, everyone could use a little extra magic and innocence during the holiday season.

But be warned: if your kids didn't have their own Elf on the Shelf before watching the movie, they'll sure want one now!

Consider watching the Elf on the Shelf: An Elf's Story a new holiday tradition. It's cute and fits right in to the excitement of the daily Elf on the Shelf fun of finding your scout elf each morning leading up to Christmas Day.

More Like This
Scott Calvin Is Ready To Retire In The Santa Clauses Series Coming To Disney+
The Best Bluey Costumes For The Whole Family
The Office Halloween Episodes: A Definitive Ranking
Kim Kardashian Stars In Hilarious House Of The Dragon Parody, The Targashians