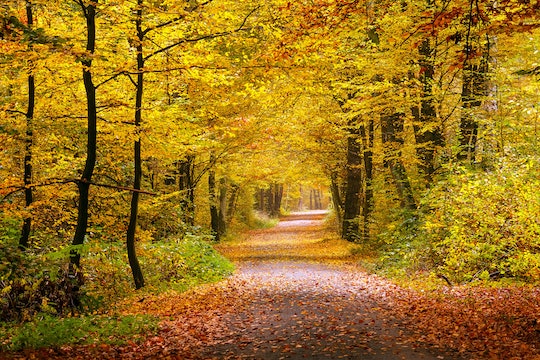 Fall Is Coming, Which Means You Can Drink Your Pumpkin Spice Latte In Public Now

Anyone who's sweated their way through a long hot summer might be totally ready for a change of season. As someone who immediately melts and starts to get a sunburn after about five seconds in the summer heat, I'm definitely among those counting down the days until fall arrives. Luckily, it's just around the corner. If you've been flipping through your calendar trying to figure out when the fall equinox is, you don't have to wait much longer. This year, it arrives on September 22.

If you're wondering why it's called an equinox, there's actually a super simple explanation according to Tree Hugger. "Equi" comes from the Latin for "equal", while "nox" means "night". Day and night aren't perfectly equal on the first day of fall, but they are both pretty close at 12 hours or so each. That's because the sun is directly above the equator on the equinox, according to Encyclopedia Brittanica.

As we get deeper into fall, the nights will get longer and the days shorter. There will be less and less daylight up until the shortest day of the year, which falls around December 21 according to Time and Date. After that, the days will slowly start to get longer again.

Unfortunately, the fall equinox may not bring much immediate relief from the summer heat. According to Accuweather, an unseasonably warm fall 2018 is expected in many parts of the U.S. The tradeoff could be pretty picturesque, however. Accuweather noted that warm weather lasting well into autumn could make for some stunning fall foliage, so get ready to see a barrage of colorful leaf pictures on Instagram in a few weeks.

By the time the fall equinox rolls around, most kids will be freshly settled into a new school year. That's not a random coincidence, according to Reader's Digest. Back in the days when many families needed all the help they could get to plant and harvest their crops, kids weren't able to start school until the fall, when they were no longer working on the farm.

School kids might be eager to try an experiment on the equinox — there's an old wives' tale that says it's the one day a year when you can balance an egg on its end. According to The Old Farmer's Almanac, however, there's no truth to that tale — so be prepared for a messy clean up if your kids ask you to try it.

The fall equinox has been a day of celebration for cultures all over the world throughout history. According to National Geographic, the ancient Mayan civilization might have thought up the most jaw-dropping way to mark the day. They built the El Castillo pyramid at Mexico's Chichen Itza in such a way that the sunlight looks like a snake slithering down its steps when the equinox arrives. The History Channel noted that historic sites like Stonehenge and Newgrange in the United Kingdom may have also been built with the fall and spring equinoxes in mind.

There's so much to love about the fall season, including holidays and celebrations like Halloween, Thanksgiving, and the Chinese Harvest Moon festival, which kicks off a couple of days after the equinox according to Time and Date. As a sleep deprived mom, however, my favorite day of fall just might be the end of Daylight Saving time, when you basically get to move your clocks an hour forward and regain that hour of sleep you gave up in the spring.