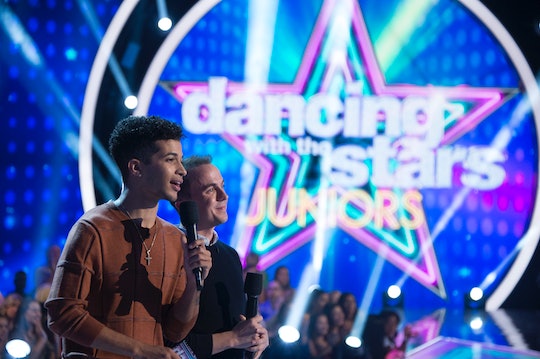 The 'DWTS Juniors' Finale Is Sooner Than You Think

For the love of all things Dancing With the Stars, the Juniors cast has had a heck of a season. Not only are they at adult competition levels, but they're still in school. Let that set in a moment. These amazing talents aren't old enough to drive themselves to the soundstage and yet, they're killing it on the dance floor week after week. As the season winds down to an end, when is the finale of DWTS Juniors?

Although I can't pinpoint a definitive end date for Season 1 of the Juniors series, all signs point to a finale on the horizon. Unfortunately, Alana "Honey Boo Boo" Thompson, Sophia Pippen, Hudson West, Addison Osta Smith and Tripp Palin have been eliminated which leaves seven remaining kid contestants to take to the floor. The next scheduled episode will be "Juniors Choice," where some of the songs — that may have a special meaning — will be chosen by the kids themselves. I can't imagine the show will go on as long as its older sibling, DWTS, because that's a lot. With only seven left, the finale is just around the corner.

If you're all ready to tune in to root for your fav, get ready: this week's episode won't be delayed like last Sunday. According To Pop Culture, ABC hosted a Micky Mouse tribute special to commemorate the 90th anniversary since the beloved mouse made his first public appearance. If you're doing the math, the Mickster goes all the way back to 1928. Obviously, it was a big deal, so the two-hour pre-taped "Spectacular" took the DWTS Juniors usual spot and it's cool.

With what can only be a short amount of time left, fans are still shocked by the elimination of Thompson (Honey Boo Boo) and pro Tristan Ianiero. The results came after Thompson talked about how much she'd improved. She spoke to Good Housekeeping last month about how DWTS changed her life, saying, "I've changed a lot. I can call myself a dancer now, and I never thought I could call myself a dancer." She even commented on the chemistry between she and her pro adding, "I didn't think our chemistry was going to be super amazing, but then we actually started dancing and practicing, and our chemistry was amazing. We're now best friends." Aww.

Thompson's not the only one inspired by the show. Young actor, Jason Maybaum (partnered with pro Elliana Walmsley and mentored by Emma Slater) spoke exclusively with Hollywood Life this summer saying, "I have been watching Dancing With The Stars for basically my whole life. It’s a really inspiring show and a really cool show. Honestly, some people don’t even care about their scores because they just want to dance and have fun and that is what I had!" Maybaum is known for his work on Disney Channel’s Raven’s Home, and now, dancing (obviously).

In terms of "who will win during the finale," here's another twist: the show actually wrapped filming back in August. That's right — DWTS Juniors is not actually live which means home viewers can't vote (like you would on regular DWTS). Instead, eliminations are calculated by judges scores and the in-house audience. According to IB Times, it's done this way to accommodate the kids' varied schedules (because, you know, work and school is s lot), as well as the mentors competing in Season 27 of DWTS. All of this to say, a finale is happening before you know it so set the DVR so you don't miss out.