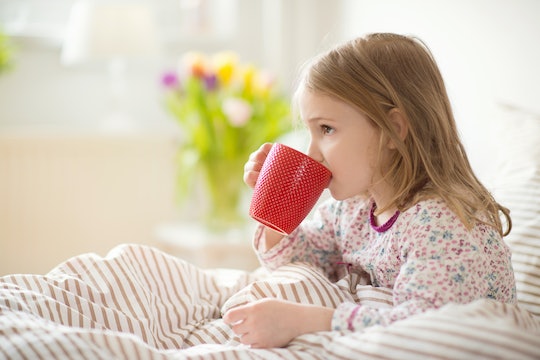 Just over a week and a half ago, I came down with the flu. It was pretty awful, and from what I understand, I only had a very mild case. I was achy, exhausted, feverish, and my head felt like a freshly cracked walnut. It's just today that I'm really back to feeling like myself, nearly 12 days later. I had no idea the effects would linger so long. It begs the question, when is the flu out of your system? Because it feels like it lasts forever.

Being fully healed from the flu is something completely different than no longer being in active infection or contagious. While the Centers for Disease Control and Prevention (CDC) note that the duration of active infection and period when a person is contagious ranges from five to seven days, being fully healed and functioning can take quite a bit more time. The fatigue of flu, notes Harvard Health, can stick around much longer. In fact, Johns Hopkins Medical Center reported that the extreme fatigue can take weeks to dissipate entirely.

All things considered, I should feel pretty lucky that I'm almost 100 percent at 12 days post-onset of infection, but that would be rational and I'm in no mood for that. I'd much rather stick to my whining and paranoia, as that's what I'm accustomed to doing.

There is a possible additional concern that you should consider when you're on the mend, but only — louder for my fellow anxiety-ridden friends in the back — if you begin to become sick again shortly after recovery. That is a complication which can happen due to the flu, but generally presents after you start to feel better. It's a phenomena known as secondary bacterial pneumonia, and it is an opportunistic disease of the lungs that happens after you get the flu. Its symptoms are rapid deterioration of health, rapid or shallow (or both) breathing, cyanosis (bluish skin), chest pain, weakness, and/or the recurrence of a previously diminished fever, according to the American Society for Microbiology (ASM).

Parents of a 10-year-old girl in Colorado have been warning other parents of the dangers of the flu and how it can manifest into pneumonia when you aren't watching your child's symptoms. The parents told WQAD8 that they want other parents to know they shouldn't wait to take their child to the doctor, even if they don't seem that sick. Because the flu can stay in your system for a while, there's a risk of complications if your child is not seen by a healthcare professional.

A study reported by Yale University found that the flu does more than just knock you for a loop — influenza also suppresses your immune system for a period of time. Researchers wrote that "influenza virus triggers a bodily response that causes a rise in serum glucocorticoid levels, leading to systemic immunosuppression. Such effects render the body vulnerable to bacterial infections that would otherwise be innocuous." This means that while you're recovering, and for a period after (varying from person to person), you are more susceptible to other viruses and bacteria.

Children can also take longer to bounce back than adults do, too, noted Kids Health. My daughter, on the other hand, is 6 years old and had what I am told was likely an attenuated form of the flu thanks to the vaccine I insisted each member of my family receive. She was tired and had a fever for several days, but overall, she was pretty OK. After she felt well, and was fever-free for 24 hours, as per the recommendation of the CDC, I sent her back to school. But again, because this was an attenuated form of the flu, her recovery is a lot different than a child with the actual flu. It's going to take a while to get better, and even after you're healed, you're still at risk for more infections for a while.

If no further complications arise, it could be anywhere from a few days to a few weeks before the flu is totally out of your system. Remember, you can get the flu more than once in a season, so wash your hands all the time. Use sanitizer when you can't wash your hands, cover your mouth with your elbow when you cough, and for Pete's sake, get the flu shot. It's not too late.