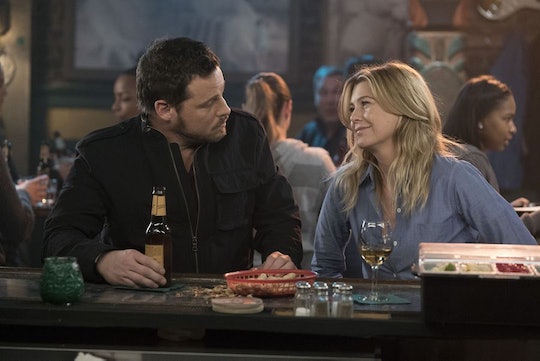 The 'Grey's Anatomy' Season 14 Finale Isn't That Far Away

This season of Grey's Anatomy has been filled with a lot of struggles and triumphs for the characters. Jo and Alex just got engaged, April is still struggling with her faith, Jackson and Maggie are officially together, Owen just left to (finally!) tell Teddy he loves her, and everyone is competing in the Grey Sloan Surgical Innovation contest. So there's a lot still to come this season, but fans are already dreading the end. To prepare, you may be wondering: when is the Grey's Anatomy Season 14 finale?

When the season first began it was only going to be a 22-episode season, which isn't all that irregular since most TV seasons are about that long. However, Grey's seasons have varied widely, from its nine-episode first season to its 27-episode long second season, so it makes sense that fans may have been wanting a little more. Thankfully, five episodes into the season ABC decided to extend the season to 24 episodes, so you'll get a little more Grey's this year.

If one episode airs each week from now until the end of the season, the finale should air on Thursday, May 17. However, since Grey's is a big fan of two-hour events, this may not be the exact date. Hopefully, an officially finale date will be announced soon so you can mark your calendars. But if you're watching Grey's every week, as you should, you shouldn't have to worry about missing it.

Season 14 is a monumental one for the series, as it marks the final season for two long-time cast members of the show: Sarah Drew, who plays April Kepner, and Jessica Capshaw who plays Arizona Robbins. A few weeks ago it was announced that their contracts would not be renewed for the next season, which has angered many Grey's fans, even leading to a number of petitions to have the two stars rehired. Some fans have even threatened to boycott the rest of the series.

Despite the backlash, the plan for this to be the last season for April and Arizona is still a go. Drew has even already been casted in a new TV series, a reboot of the 1980s police procedural, Cagney & Lacey. Thus, unfortunately, it seems this season fans really will have to say goodbye to April and Arizona. Along with them, Dr. Bailey's husband, Ben, has also left the series this season, though he has only moved to a later time slot, as he's now starring on the Grey's spin-off, Station 19. But even though he's now on a new series, Ben will still pop up from time to time on Grey's so it's not really a goodbye.

Besides the shake ups, you'll definitely want to keep watching to see how this season of Grey's comes to end, especially with the surgical innovation contest on the table. With Jo's help, Meredith decided to throw her hat back in the ring, even though her mother's best friend-turned-enemy wouldn't let Meredith use her patent. Also competing are Bailey, Webber, Maggie, and Arizona.

On top of that, with Jo and Alex now engaged, there may even be a wedding before this season comes to an end. Also, Maggie and Jackson's relationship is only just getting off the ground, and one has to wonder if Jackson will ever tell Maggie about that kiss her shared with April. Sure, April initiated it, but I would guess Maggie would be upset if she hears about it from someone else.

As you can see, there's still plenty to see in Season 14 of Grey's Anatomy before the finale. So don't worry, fans will have more than enough drama to be getting on with.