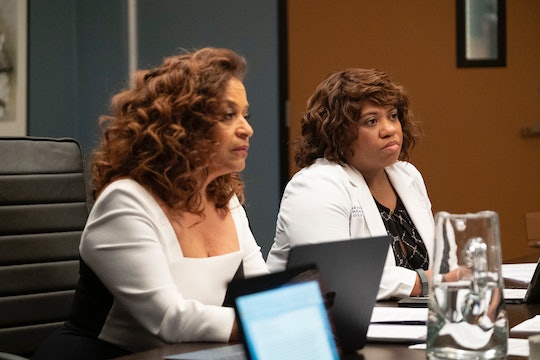 Grey's Anatomy is approaching the end of its fifteenth season, which is an incredible feat all on its own, but it becomes more impressive when you realize just how many episodes the show churns out every season. While some series stick to an easily digestible 10 or 13 episodes a year, the Grey Sloan crew is working 'round the clock to produce upwards of 20. But when is the Grey's Anatomy Season 15 finale? And how many more tragic accidents and shocking reveals can they fit into the season before then?

According to Deadline, ABC has set the Grey's Anatomy Season 15 finale for May 16. "Jump Into the Fog" brings the season to a close with a staggering 25 episodes (it feels so long ago that every TV show stuck it out for over 20 episodes!). And it'll be a special occasion for a few reasons; Episode 25 is also number 342 in the show's long run. They're almost at 350 episodes! The mind reels. Hitting a hundred episodes is an accomplishment, but if Grey's ever makes it to 400, someone should really hand out cupcakes or something.

But even without reaching that nice, even number, the Grey's Anatomy Season 15 finale will mark another milestone crossed. Entertainment Tonight reported that with "Jump Into the Fog," Grey's Anatomy will be the longest-running primetime medical drama on TV ever.

Previously, E.R. had earned that spot, having aired from 1994 to 2009 with a total of 15 seasons and 331 episodes. Grey's Anatomy has managed to surpass that number, but it also shows no sign of stopping just yet. Though it hasn't been officially renewed by ABC for Season 16, Deadline reported that it would likely have another season. Karey Burke, the President of ABC Entertainment, told Deadline that they were "planning for more," but it didn't seem confirmed yet.

However, the show might not continue past Season 16. It's too early to speculate, but when asked about the future of the series by Entertainment Weekly, star Ellen Pompeo indicated that she was ready for a change. She began by saying that she wasn't prepared to "make any formal announcement about my future on the show," but she did feel that they had already told most of the stories they could tell. As much as she cared about the show (and she emphasized that she gave it 200 percent of her energy), she was also excited to try new things.

But let's not worry about that yet! Per Deadline, the Season 15 finale will be written by Krista Vernoff and directed by Debbie Allen. Unfortunately, details of the plot seem to be under wraps, because the episode summary is the epitome of vague. Instead of offering a more specific information about what each character will be getting up to in the finale, Deadline's synopsis sums up the series as a whole.

"Meredith Grey and the team of doctors at Grey Sloan Memorial are faced with life-or-death decisions on a daily basis," it reads, before explaining that the doctors will seek comfort (and romance) from each other. In the process, they learn that neither their jobs nor their relationships are cut and dry. That's pretty much the thesis statement for the entire show, so it doesn't help when trying to figure out the plot turns of the finale.

So instead of worrying about what may or may not befall the doctors of Grey Sloan in a couple of weeks, fans can celebrate how much it's accomplished and how much is still to come.