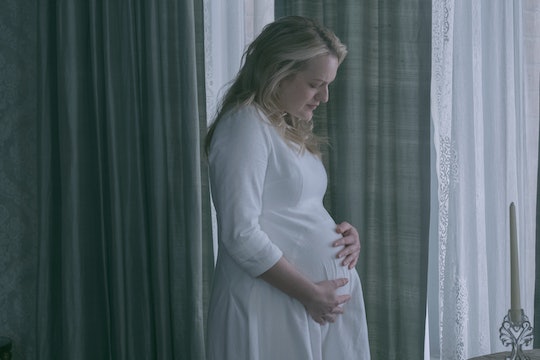 'The Handmaid's Tale' Season 2 Is Almost Over

The second season of Hulu's The Handmaid's Tale has been an especially brutal journey that brought protagonist June close to escaping before dragging her back into Gilead once again. June has tried to find freedom in small ways, but it remains to be seen whether she will ever get out for good. There could be time for her to find a way before the season ends, as long as you know exactly when that is. So when is The Handmaid's Tale Season 2 finale?

Harper's Bazaar previously reported that the season would be 13 episodes long, so there are still three more to go. Romper reached out to Hulu to confirm that, and was informed that Season 2 would definitely have 13 episodes total, with the last one airing on July 11. There won't be any breaks as Season 2 barrels towards its conclusion — whatever that conclusion might be.

The tenth episode, "The Last Ceremony," ended on an unsettling cliffhanger: June is edging ever closer to going into labor, but has been left alone in an isolated house after a painfully brief reunion with her daughter Hannah. Only Commander Waterford knows her whereabouts, because Nick has been taken into custody. It's unclear what the future holds for June, but there are three more episodes left to answer that question.

Season 2 has been notably tough to watch, and in many ways Episode 10 was the culmination of all that trauma and pain. The episode's writer Yahlin Chang is fully aware of just how difficult some of the scenes have been to watch, but she told The Washington Post that she wanted viewers to stick with it despite that. Chang promised that the end of the season would be worth waiting for, saying:

I do worry about people not wanting to watch because this was a very hard episode to watch. I have to say Episodes 11 through 13 are just unbelievable. There's just this ramp-up adrenaline, momentous, amazing feeling. Especially the next episode right after this one, it's incredible. One of the best episodes of television ever.

Though Chang admitted there would be "huge upsets" in upcoming episodes, she also made sure to assure fans that there would be "amazing triumphs," too. As Chang explained in another interview with Vanity Fair, the show was "like a long novel with lots of chapters," which means there will be ups and downs along the way.

Cosmopolitan reported that the show has already been renewed for Season 3 and, according to Chang, the writers have already begun planning for it. She revealed to Digital Trends that the talks were just preliminary, but that whatever they do "is going to be really surprising and shocking." That's par for the course, but less expected is a hint of optimism: Chang said that she hoped there would be some uplifting moments in the third season, which any audience member would surely agree with.

Season 3 is still a long way off, but showrunner Bruce Miller is prepared for the show to run for much longer than that. He told The Hollywood Reporter that there were so many possibilities within Gilead that he was eager to explore, and he had "roughed it out to about 10 seasons when I was first working on it." Though June's journey would always be the backbone of The Handmaid's Tale, that journey could take any number of turns as the series continues.

There's so much uncertainty at the moment, but the story isn't over yet. No matter what happens in the Season 2 finale, June will be around to start her next chapter.