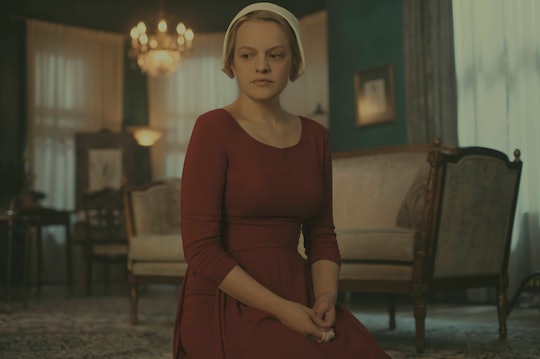 More Of 'The Handmaid's Tale' Is On The Way

Hulu's adaptation of Margaret Atwood's bestselling dystopian novel The Handmaid's Tale, has been all people can talk about since it's release. Starring Elisabeth Moss as the protagonist Offred, fans have been following along as Moss' character attempts to navigate through the new United States, now known as Gilead. In this new man-dominated world, Offred — along with all the other fertile women — are forced to become Handmaids, made to bear the children of Commanders whose wives are infertile. The show is so popular that it's already been renewed for a second season. So when is The Handmaid's Tale Season 2? There's no official release date just yet but, according to Variety, fans can expect the story to continue sometime in 2018.

For fans of the book, there may be some concern. Although the show has only released four episodes of it's first season thus far (three last week and one this week), most fans probably assumed this first season would cover the entire novel. If the first season does go through the entire book version, what will the second season even be about? Obviously, the show will be delving into creative waters, but that may be OK. In fact, it could actually be pretty amazing.

The show has already received critical acclaim for its great narrative structure, writing, and timeliness. The series has excelled at bringing Atwood's characters to life and if the show does surpass the book, the writers will then have free reign to continue the story as they see fit. No one will have to worry about how close to stick to the source material, because they're won't be anymore source material. More importantly, fans can stop comparing the show to the novel and instead just focus on the series as it's own entity.

The Handmaid's Tale wouldn't be the first show to go past its source material. Game of Thrones did so in its latest season and it became, arguably, the best season to date. Moreover, The Handmaid's Tale novel's ending is pretty open-ended and fans may be curious to know what happens next. Offred's story doesn't really get a conclusion and by continuing the show she may finally get one, whether it's good or bad.

It'll be interesting to see how the first season of the show progresses and where it leaves off, giving fans a clearer picture of what to expect in the second installment. For now, fans can continue watching The Handmaid's Tale on Hulu, with new episodes being released every Wednesday.