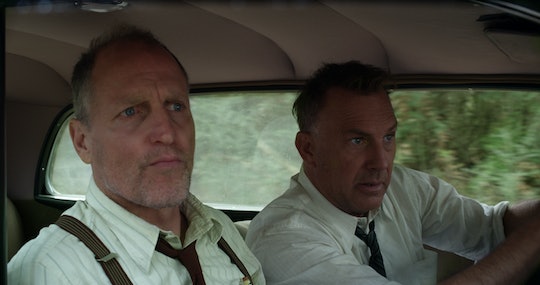 If you're into old stories about criminals, Netflix has your back withThe Highwaymen which follows a lawman tracking the infamous outlaws, Clyde Barrow and Bonnie Parker. Yep — that Bonnie and Clyde — two of the most notorious criminals in history. The gritty drama explores the journey on law enforcement's end at a time there were no GPS trackers or DNA evidence like we have today. So when is The Highwaymen set? Let me take you back a few decades.

To understand the events that unfold in The Highwaymen, you'll have to travel back to Depression-era middle America. On May 23, 1934, police found, and killed, Bonnie and Clyde, according to The History Channel website. They were "shot to death by Texas and Louisiana state police while driving a stolen car near Sailes, Louisiana." This is after a years long chase that had police dumbfounded. Quite often they'd catch the duo's trail — even arresting, capturing, or killing those who aided and abetted in Bonnie and Clyde's murderous mischief.

To understand how the couple could remain on the run for two years, killing "13 people, including nine police officers," remember the 1930s as they were. Along their runaway journey, they attracted the help of multiple accomplices to "rob a string of banks and stores across five states–Texas, Oklahoma, Missouri, New Mexico and Louisiana." Eventually, Bonnie and Clyde, along with those accomplices, became known as "the Barrow Gang," which included Clyde's childhood friend, Raymond Hamilton, W.D. Jones, Henry Methvin, his brother, Buck, and his wife Blanche. They were armed and dangerous, and didn't hesitate to kill law enforcement if cornered.

While a lot of Bonnie and Clyde's shenanigans have been romanticized on TV and in movies, The Highwaymen aims to delve deeper into those affected — families of slain officers, the robbed, the blind-sighted, and everyone else in their path of destruction. The movie stars Kevin Costner as former Texas Ranger Frank Hamer, while Woody Harrelson plays alongside him as Maney Gault. It's a story that's been in the making for over 10 years — that version was originally to star Robert Redford and Paul Newman as, according to Vanity Fair, "two aged former Texas Rangers, charged with taking down Bonnie Parker and Clyde Barrow when the F.B.I. couldn’t."

Costner commented in the same Vanity Fair interview, saying, "Seeing what happened to Hamer, with his widow going to court to defend her husband — understanding that maybe the most legendary Texas Ranger who stood tall in battles, protected people in front of mobs, kept them from being harmed, was being portrayed like that . . . The scales on your eyes come off a little bit,” said Costner. “I don’t know that Penn thought he was really doing that."

Harrelson spoke at SXSW about his admiration for the original Bonnie & Clyde movie that premiered in '67, according to Den of Geek. He added, in part, "There’s not much made of the lawmen in that original movie. And in this one, you follow the lawmen. Frank Hamer was a phenomenal, interesting, very strong character in Texas history, and probably the best known Texas Ranger. And Maney Gault was also probably a pretty cool guy."

You don't have to be into crime movies to get into The Highwaymen — just someone who wants to see the whole picture.