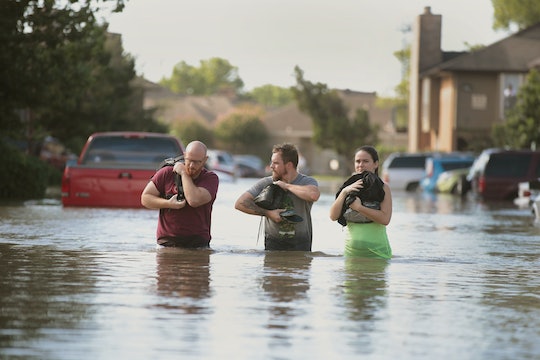 The tragedy facing Houston, Texas is unignorable. Since Harvey hit landfall this past weekend, the city of Houston has had its fair share of hardship. Relief efforts to help those displaced by the storm are underway, and there is so much that needs to be done. But one fundraising effort, full of your favorite celebrities, can bring relief and help so much closer. And the Houston Telethon will do just that. With exciting announcements about the telethon underway, first reported by TMZ, it will surely have people wondering when the Houston Telethon is and how they can catch it. This way, people will have an easier way to connect with their favorite celebrities and make a difference at the same time.

The star studded event will reportedly take place on Sept. 12, according to TMZ, but the details are still being ironed out. While there haven’t been any major announcements about the telethon yet — like what channels it will air on or what time it exactly air — it definitely sounds like it will be a huge event.

There are some details, though. According to TMZ, the telethon will air live from three major cities — Los Angeles, Nashville, and New York — for just one hour only during prime time hours in two weeks, presumably on Sept. 12.

TMZ also reported that, according to telethon organizer, rapper Bun B, the telethon will feature major celebrities (like Hillary Duff and Michael Strahan) who were born in Houston and will be organized by the people who organized Ariana Grande’s fundraising effort, One Love Manchester, that aired earlier in the summer.

What's more, actor Jamie Foxx confirmed on Instagram on Wednesday that a telethon is in fact happening and that he would be involved in it in some capacity.

This telethon has the potential to raise some major money. Telethons connect viewers at home (like me or you) to their favorite celebrities on TV, asking the viewers to raise money for a good cause. And if you haven’t donated money to relief efforts in Houston yet, this telethon could be the perfect reason to do so. Or, if you have donated money to relief efforts by the time the telethon airs, it is another good reason to send additional funds to those in need, who will undoubtedly need a lot of resources in the coming months.

If One Love Manchester had the power to raise more than $3 million and draw in 49.5 million viewers, the Houston Telethon can have the power to do just the same. In 2005, three different celebrity filled telethons raised a combined $81 million, according to Billboard, for relief efforts in Louisiana for Hurricane Katrina.

Houston deserves all the help it can get. As of Wednesday, the now-tropical storm has dumped more than 52 inches of rain over Houston and surrounding areas, according to CNN, and broke the record for rainfall from a single storm. Flooding is still prominent in the area and many residents have been displaced from their homes that have been inundated with flood waters.

Any bit of money helps the people impacted by the storm and the telethon, when it airs, will have so much potential to do so.