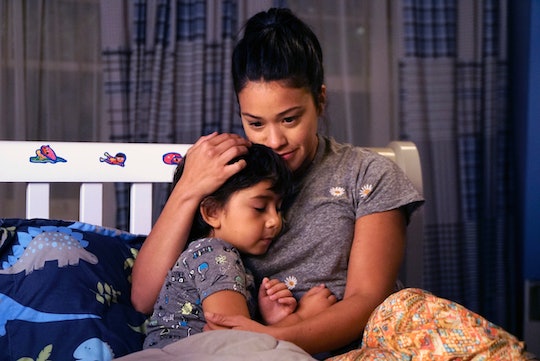 'Jane The Virgin' Is Getting A Midsummer Series Finale

It’s hard to believe that this is the last season of Jane The Virgin, it’s going to be a tough goodbye. But as hard as it will be, fans are counting on getting some closure when the show ends. With the fifth and final season in full swing, there are still plenty of burning questions that need to be answered, so fans want to know: when is the Jane The Virgin series finale?

As of now, The CW hasn’t announced an official date for the series finale, but because Season 5 started in March, you should expect to see the last episode sometime this summer. The final season will air with a total of 19 episodes, so if the show continues to air every Wednesday without skipping any weeks, the finale would air on Jul. 31. But this is just an estimate, and I’m sure the network will release an official finale date in the upcoming weeks.

In an interview with Metro last year, executive producer Brad Silberling revealed that Jane The Virgin would end with its 100th episode, and that this was the schedule showrunners mapped out from the very beginning. “It is a wonderful final season of the show,” he said. “It is exactly as it was laid out… [We’ve] always known when it was going to end. It will be 100 episodes when it’s done and 100 is exactly where Jennie [Snyder Urman, executive producer and creator] always hoped it could end the story. So it’s perfect.”

I know fans are dying to see the series end with Jane getting the happy ending she deserves. Her love triangle with Michael and Rafael is finally over, and even though Rafael is hesitant about being in a relationship with her, he may come around towards the end of the season. And hopefully, fans finally get the answer to one of the biggest mysteries in the series — who is the narrator?

When talking to Variety, lead actress and director Gina Rodriguez said that fans can expect some fun surprises this season, and she noted that the story will wrap up in a way that makes sense for Jane. “There’s a lot of dope things this season,” she told the outlet. “Season 5 is incredible—it still twists and turns. It’s gonna give you that same beautiful roller coaster of a ride of emotions and experiences. And there’s such beautiful episodes outside of the spaces that we’re used to, and it just really gives us a different scope of what Jane is going through and how we’re gonna close this whole story up..”

There were talks of a spin-off series, Jane The Novela — a series of telenovelas based on the novels Jane’s character has written. But in early May, TV Line reported that The CW passed on the pilot for the series. Unfortunately, this means that the final season of Jane The Virgin will be the last time fans get to see their beloved Jane.

New episodes of Jane The Virgin air Wednesdays at 9 p.m. ET on The CW.