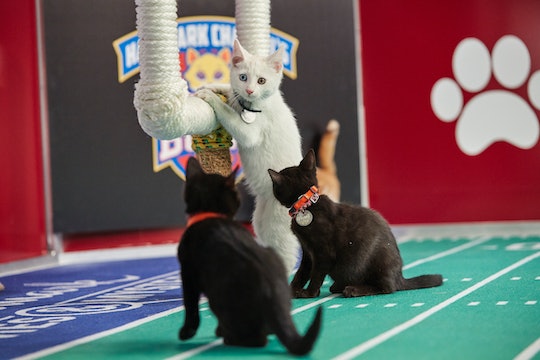 The sixth annual Kitten Bowl, known as the “Kitten Bowl VI,” will premiere on the Hallmark Channel on Sunday, Feb. 3 at 2 p.m. ET. According to Hallmark's website, kittens who were rescued from all over the United States will be competing for the National Championship of Feline Football trophy. The North Shore Animal League, which is the biggest "no-kill rescue and adoption organization" in the world, is providing the rescued kittens for the event.

If you have cable, you can watch the Kitten Bowl by tuning into the Hallmark Channel. For those without cable but with a trusty cable provider login (you know, your parents' login that you use to watch Game of Thrones on HBO Go), you can login on the Hallmark Channel Everywhere website and stream the entire event for free. And, as always, there's the option of signing up for a free trial of Hulu, Sling TV, or a similar service that allows customers to stream live TV. Just remember to cancel before your card is charged. (Don't say I didn't warn ya!)

The goal of the Kitten Bowl (other than to be the cutest thing on TV) is to get as many animals adopted as possible. According to a press release for the event on Hallmark's website, clips will also play of animals from various local areas who are in need of adoption during the Kitten Bowl. As noted by the ASPCA (American Society for the Prevention of Cruelty to Animals), approximately 1.5 million shelter animals are euthanized (that's about 670,000 dogs and 860,000 cats) in the United States every year.

Luckily, that number has declined over the past few years (around 2.6 million shelter animals were put down in 2011, according to the ASPCA). Every animal adopted means a new space opens up in a shelter to save another animal's life, so if the Kitten Bowl tugs at your heartstrings and gets you interested in fostering or adopting a kitten, listen to that inner meow!

Not to mention, the event will be hosted by Beth Stern, an author and passionate cat rescuer. Stern is truly the perfect woman for the job. As she told Architectural Digest in December 2017, she and her husband Howard Stern have fostered more than 500 cats and kittens in their house, each of whom was then adopted and brought into a forever home.

The Kitten Bowl has been going on for six years now, and to supplement the cuteness, this year will be the first ever Cat Bowl. As Hallmark's website noted, the Cat Bowl, featuring "your favorite Kitten Bowl heroes, all grown up and taking the field," will air on Saturday, Feb. 2 at 10 p.m. ET on the Hallmark Channel.

From adopting to fostering to volunteering, there are countless ways to get involved with the North Shore Animal League. Check out their website for more info. Have a great Kitten Bowl Sunday!