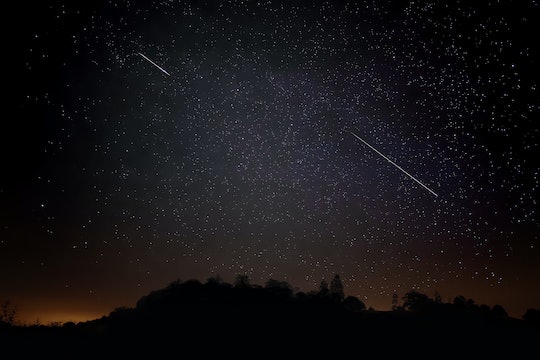 The Lyrid Meteor Shower Only Happens Once A Year, So Don't Miss It

After witnessing the awe-inspiring super blood wolf moon back in January — which looked like a giant, suspended ball of embers — I must admit, I'm now into skywatching events. Being able to witness a natural wonder like that, with my young daughters by my side, felt magical, even if it meant keeping them up well past bedtime. So when I caught wind that there was going to be another spectacular celestial light show happening sometime this spring, I needed to know all the details about when the Lyrid meteor shower 2019 was happening.

More Like This
How To Dress Your Baby For Sleep In The Summer
These Couches Are Perfect For Climbing If The Nugget Couch Is Sold Out
18 Best Sand Toys In 2021 For Babies, Toddlers, & Kids
You Will Not Regret This Perfect Baby Pool From Target

For newbie stargazers, it's first worth noting what the Lyrid meteor shower is, and what makes it notable. "Lyrids are pieces of debris from the periodic Comet C/1861 G1 Thatcher and have been observed for more than 2,600 years. In mid-April of each year, Earth runs into the stream of debris from the comet, which causes the Lyrid meteor shower," explained NASA. And while the Lyrids, which are best viewed from the Northern Hemisphere, are only a medium strength shower, they can produce fireballs, according to the American Meteor Society (AMS). What's more, there are generally 15-20 meteors per hour, NASA meteor expert Bill Cooke said in an interview with Space.com

So, when should you plan on trekking outside and looking upward? The AMS is predicting that the peak viewing time will be the night of April 21 (morning of April 22), and meteor showers are generally best viewed well before dawn, according to Space. However, because the moon will be close to full (i.e. bright) your meteor observations might be limited, according to In The Sky.

I don't know about you, but my curiosity was piqued the moment I heard 'fireball.' That, plus the fact that this celestial event is literally centuries old. However, if the idea of getting up before dawn to see a meteor shower that might be mostly obscured, isn't your idea of fun, don't worry. There's actually a window of time where you could possibly see some cosmic debris racing through the night sky. From April 16 and April 28, some Lyrid meteors will be on view, weather permitting, according to AMS.

It is worth noting, though, that past Lyrid meteor showers have been a hit-or-miss situation. "The Lyrids are really unpredictable,” Cooke said in an interview with NASA back in 2015. Though, if you're able to catch a sight of Lyrid, it sounds pretty mesmerizing. "I was lucky to see a very large, bright green meteor or astroid flash towards the West as I was driving South on 280 freeway at about 10:45pm. It was so bright and vivid, I will never forget it and I have never seen anything like it," said one commenter on the NASA site.

In terms of viewing gear, you don't need to worry about finding someone with a telescope. "No special equipment is needed to watch a meteor shower. Simply find a dark, open sky away from artificial lights. Lie down comfortably on a blanket or lawn chair, and look straight up," advised NASA.

Here's hoping the 2019 Lyric meteor shower is a standout one.