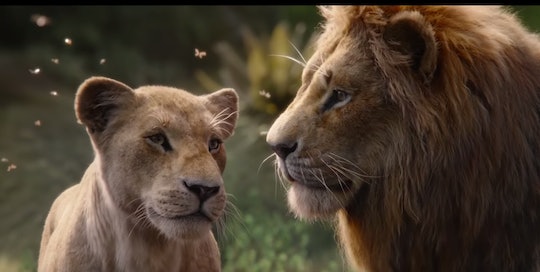 Hakuna Matata, Everyone: The New 'Lion King' Is Coming To Disney+ Next Month

Disney+ has been around for more than a month now, which means you've likely made your way through the new streaming platform's extensive library and have noticed that Disney's 2019 telling of The Lion King isn't available to stream right now. So when is the new Lion King coming to Disney+? Good news, you won't have to wait much longer to watch Simba, Nala, and more in this updated beloved classic from the comfort of your home.

The highly-anticipated CGI masterpiece hit theaters on July 19 with a star-studded cast, including Donald Glover as Simba, Beyoncé as Nala, Seth Rogen as Pumbaa, Billy Eichner as Timon, and James Earl Jones reprising his role as Mufasa. Although some critics felt the film lacked emotion, the 2019 version of The Lion King is officially Disney's highest-rated animated movie ever, according to Vanity Fair. What's more, The Lion King is nominated for two Golden Globes. So it's probably safe to say Disney fans will be pouncing to watch it again once it's finally released on Disney+.

And thankfully for Disney fanatics, the big day for the live-action Lion King remake is now within sight as it's scheduled to be available on Disney+ on Jan. 28, 2020. Which means there's only one more month to go before you can stream it from your living room.

When the streaming platform launched on Nov. 12, many users were initially disappointed to learn the new Lion King movie — among other films — weren't included with their subscription right away. The reasons for missing movies varied from "just not yet," to the fact that Disney had pre-existing contracts with other streaming services, to Disney' deeming certain movies "too controversial" for the streaming platform. But don't fret, the 2019 version of The Lion King is indeed coming to the platform next month.

While you wait for Jan. 28 to arrive, you might want to re-visit the original 1994 movie with the kiddos. And if you really want to immerse yourself in that world, you can also watch The Lion King 2: Simba's Pride and The Lion King 1 1/2, and TV series The Lion Guard on Disney+. Hakuna matata!

More Like This
'Women Talking' Overwhelmed Me With Grief — And A Sense Of Possibility
'Women Talking' Is A Powerful New Movie Based On A Book
Marcel The Shell Is Heading To The Oscars!
Pixar’s 'Turning Red' Is Nominated For An Oscar — Here’s How To Watch It Right Now
What Parents Are Talking About — Delivered Straight To Your Inbox