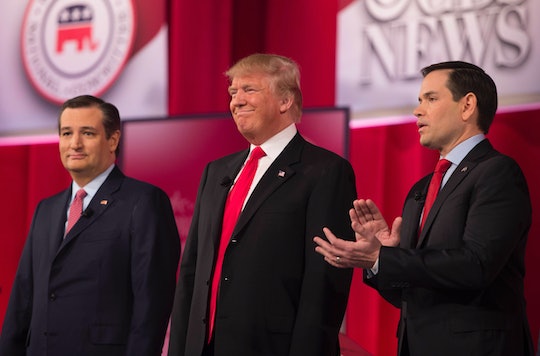 When Is The Next Big Primary? That Depends On Who You Ask

As the single day where more delegates are awarded than any other in the primaries, Super Tuesday typically gets all the glory. But die-hard delegate-watchers would remind us that, due to some fiddling with primary calendars that happened after the 2012 elections, Super Tuesday actually kicks off a month-long series of primaries that can make or break a candidate’s chances for the nomination. Think of it as basically March Madness for election junkies. And it’s that wonky election math that makes the question of when the next big primary is pretty complicated to answer, really. The next big calendar date depends on who you ask.

With the delegate-heavy contests of Super Tuesday behind us, most media outlets have quickly switched focus to March 15 — the day when the next major prizes on the delegate map will be awarded: those in North Carolina, Florida, Illinois, and Ohio. According to Ballotpedia, together the March 15 primaries will allocate 1,151 delegates, and represent the halfway mark in the nomination race.

So, the stakes for the March 15 primaries couldn’t be higher, in terms of delegate math. But as Washington Post columnist Todd Zywicki pointed out Wednesday, the election calendar has so far been weighted toward open primaries, meaning that voters were free to ask for a ballot from either party. This Saturday, March 5, the GOP will hold four primary caucuses or primaries in Kansas, Kentucky, Louisiana, and Maine — and they’ll all be closed.

What difference does it make if a primary is open or closed? Zywicki pointed to a theory that the high turnout of Republican voters in open primaries is due (in part) to some Democrats requesting GOP ballots. Rather than voting along party lines, the theory was that Democrats in states like South Carolina requested Republican ballots in order to stack the deck for a Donald Trump win — and perhaps an easier general election.

The underlying vote counts from Super Tuesday lent some credibility to that idea: a separate Post article reported that 1 million more people voted in the Republican primaries in those dozen states than in the Democratic races. Of course, that dynamic made sense in red states where Republicans really do outnumber Democratic party members. But in South Carolina — where Trump won the primary this week — the high Republican turnout was accompanied by a lower-than-expected vote in the Democratic race, just 367,000 votes rather than the 390,000 that has predicted, according to Zywicki.

That means the four March 5 contests, with only 234 delegates at stake, could have major implications for understanding which candidate Republican voters have really chosen. With voters only able to weigh in on the candidates from their registered party, we could finally have an clear view of whether more GOP voters stand behind Texas Sen. Ted Cruz or billionaire businessman Donald Trump. And, of course, if more GOP candidates decide to exit the campaign, things could heat up even more.

So mark your calendars for March 5, because the GOP race could start to get pretty interesting.