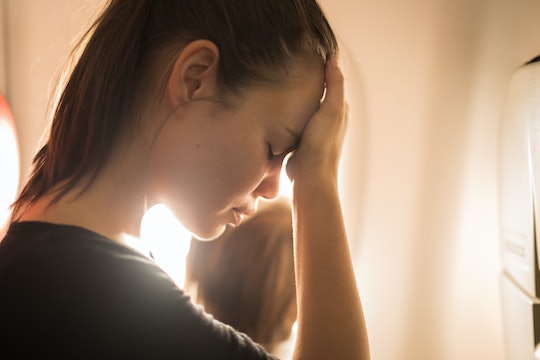 The Next Mercury Retrograde Is Coming At The *Spookiest* Time Ever

When things in your life feel a little more hectic than normal, then maybe the stars (and at least one planet) are to blame. Exactly when is the next Mercury retrograde happening in 2019, and what does that mean in an astrological sense? It just might provide an explanation for all the chaos.

So what exactly happens when a planet is in retrograde? In astronomical terms, retrograde motion occurs when a planet appears to change movement in the sky, according to a NASA website. The planet doesn't actually start moving backward in its orbit (that would be freaky). Instead, retrograde motion is a sort of optical illusion created by the position of the planet, its relation to Earth, and their orbit around the sun. There's a video from Vox explaining Mercury retrograde that illustrates this concept well.

Although people now understand the mechanics behind retrograde motion, for those in ancient times, it literally looked like some of the planets would start moving backward in the sky from time to time. Naturally, this was kind of alarming. According to the ancient branch of horary astrology, times of Mercury in retrograde were associated with negativity. "A typical phrase that was used in relation to horary questions during mercury retrograde was ‘nothing will come of it,’ [meaning that] nothing will come of the question asked," said Nicholas Campion, a historian of cultural astrology at the University of Wales, in TIME. And for the most part, plenty of modern people still hold a similar belief around times of Mercury in retrograde.

Mercury in retrograde has been blamed for all sorts of calamities, but there are some aspects in particular that tend to go wrong at this time. Failures in communication are common during retrograde, so text and tweet carefully, as explained in Elite Daily. This is related to the idea of Mercury as a messenger in Roman mythology, so attempts at communication may be garbled during retrograde, as further explained in Elite Daily. Mercury retrograde is also notorious for causing issues with technology, according to Astro Style. So if your computer keeps crashing or your phone get glitchy, then consider blaming the fast-moving Mercury and its seemingly backward motion.

So what can you expect for the upcoming retrograde in late October? Well, it was referred to as "literally the spookiest, most Halloween astro event" by astrologer Leona Moon in Cosmopolitan, so just get ready for some weirdness.

Whatever your thoughts on astrology, it's certainly handy to have a scapegoat for all the seemingly random chaos that comes at you on a daily basis. So when the printer jams for the millionth time or your latest group text gets misinterpreted, you know who to blame.