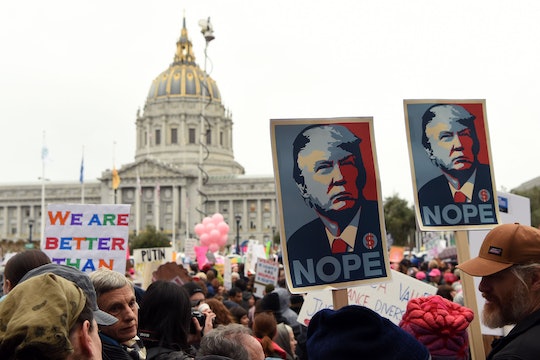 When Is The Next Women's March?

By any measure, the Women's March on Jan. 21 was a success. But the lingering question is what will come next. How can the energy of the millions who marched all over the world be harnessed into action? Another new idea proposes just how to keep the protest spirit going. Another march. When is the next Women's March? It's on tax day, so mark those calendars.

The idea was inspired by President Trump's own adviser, Kellyanne Conway, who casually batted away the question about whether Trump plans to release his taxes on Sunday's This Week. "The White House response is he's not going to release his tax returns," Conway said, according to NPR. "We litigated this all through the election. People didn't care."

The statement was a departure from the campaign talking point repeated by Trump and others that the taxes weren't being released because Trump was under an IRS audit. Trump said at a Jan. 11 rally, according to NPR:

So now people are ready to get together for another big march to show President Trump that they do care, and it's time for the American people to see what's going on with Trump's finances.

So on Saturday, April 15, what would be Tax Day if it fell on a weekday, marches are being planned to show Trump that the American people do care very much about seeing his taxes. Tax Day this year technically falls on April 18 because Emancipation Day is commemorated on April 17, according to the Huffington Post.

The Tax Day march was first suggested on Twitter, and it didn't take long for the idea to catch fire. Law Professor Jennifer Taub was one of the first to put the idea out there, the Huffington Post reported.

In addition to the Tax Day march, which is also a grassroots effort, The Women's March organizers are working to maintain the incredible momentum the movement gained following the success of the Women's March.

"There are already things happening right after the march," Linda Sarsour, the co-chair of the Women's March on Washington and executive director of the Arab American Organization of New York said, according to PRI.

Following the March in Washington D.C., there was a training for women to learn how to run for office, coordinated by Emily's List. And the Women's March website has rolled out a "10 Actions/100 Days" program to keep the activism going and engaged. With it, the organization will share an "action" every 10 days. The first of which suggested sending postcards to your Senators to tell them what matters most to you.

"You can go it alone, or consider inviting some friends, neighbors and fellow Marchers over for a drink or dinner sometime in the next ten days to talk about your experience and fill out your postcards," the Women's March "action" 1 out of 10 suggests.

So whether you're moved to resist the Trump administration on transparency, taxes, immigration, climate change, women's rights, minority rights, criminal justice reform, or some combination of all of those things and more, the Women's March organizers are trying to keep you engaged and in the fight for the long haul.