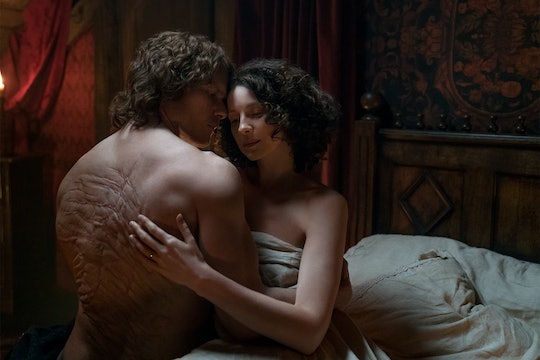 The 'Outlander' Season 3 Finale Will Be Here Way Too Soon

With Outlander just about halfway through its third season, fans are beginning to wonder how much longer they'll actually get to spend with Jamie and Claire before they disappear for another year and a half. So when is the Outlander Season 3 finale? Not to worry, the world's most attractive on-screen duo and everyone's favorite couple will still be around for several more weeks of nonstop adventure and hijinks.

The season finale is currently set to air on Dec. 10, giving everyone a few weeks to recover before they have to act normal around family for the holidays and start in on their Outlander withdrawal. Though, I must admit, December is looming a little too close for comfort right now, especially since it now signifies the end of another Outlander installment.

It was a little unclear at the beginning of the season whether Season 3 would follow the episode model of the first season or the second. The first season aired the first eight episodes, then there was a break of six months (a little excessive in my opinion) before airing the next eight episodes for a total of 16 weeks of Scottish amazingness. The second season took a more traditional route. The series aired the 13 episodes of the season consecutively, with no irritating little hiatuses. So what would you prefer — 13 episodes right away, or an agonizing break in exchange for three more hours of Jamie and Claire? Well I hope you said the latter option.

It appears that Outlander Season 3 will have 13 total episodes and finish up on Dec. 10. That means that there will be no more little breaks, like the one that took place between Episodes 5 and 6. While I might wish for more time with the couple, I am glad that I'm not being required to sit through anymore waiting.

What I do find frustrating, however, is that with only 13 hours to tell this story, Claire and Jamie were forced to spend almost half of the season apart. But show creator Ron Moore told IndieWire that he was "firm" on this time frame. "I was like, ‘I want them to want it,'" he said. "I’m happy that they’re going a little crazy. Let’s make them earn it, getting them back together."

Well, I'd say mission accomplished. There are only seven episodes left of this season, though, and still a lot of story to cover. While I understand that the reunion after 20 years had to feel "earned," I'm still eager to get on with the rest of the story the duo will embark on together from here on out.

Based on the ending of Episode 6 "A. Malcolm" it looks like the pace of the show is finally picking up again. Claire is in imminent danger (again) because Jamie is doing something sort of noble but also illegal (again). In the next few episodes, Jamie and Claire will have to sort out whatever nonsense is happening in Edinburgh, go back to Lallybroch, then find their way to a ship and eventually Jamaica before the end of the season. All of that story makes for an action-packed second half of the season.

Now that everything is ramping back up, my only sense of sadness is that Dec. 10 is sure to be here before I'm emotionally ready for it. And then what am I supposed to do with myself?