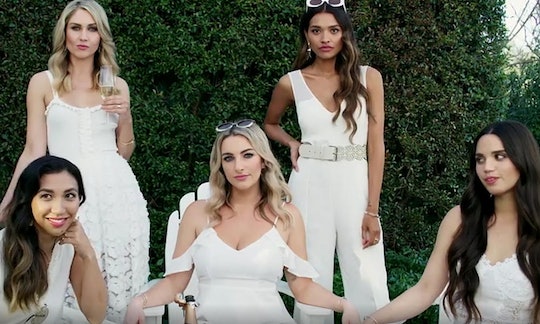 MTV is doubling down on its mom content with Pretty Little Mamas, a Teen Mom meets The Hills-esque mashup that seems intriguing if nothing else. At least, it's definitely enough to pique MTV viewers' interests, so they may be wondering when the premiere of Pretty Little Mamas is. The series debuts on the network Thursday, August 30.

Pretty Little Mamas follows a group of 20-something mom pals with highly Instagram-friendly lives living in San Diego. In a ton of ways, it feels like a modern look at motherhood: most of these moms aren't in nuclear families (only one of them is married), and they're focused on school or building their careers — as opposed to having everything perfectly figured out before giving birth. Considering how economically unstable many Americans are in their most fertile years these days, there's something hugely relatable about a bunch of women just going for babies and figuring it out along the way.

On the other hand, Pretty Little Mamas is also very slickly produced and aspirational. Everyone's hair and makeup is Instagram-level flawless at all times, and they seem to spend a lot of time brunching, shopping, rosé drinking, and oyster shooting. So while it's definitely relatable, not everything about the show is totally realistic when it comes to some of the less glamorous aspects of mom life.

"We live the best life: high fashion, cute boys and the hottest parties," queen bee Nicole declares in the trailer for the series. She's a 24-year-old grad student trying to juggle her often frustrating boyfriend, living with her parents, and raising her daughter Noelle with the help of a full-time nanny.

Her mom squad consists of Nicole's closest friends from high school, plus one newcomer to the group, which ten out of ten experts agree is the best formula for reality TV success.

The newcomer is an aspiring model named Nikki, who was born in Singapore and moved to Southern California for college. After an unexpected pregnancy, she's learning to make it work with her boyfriend while balancing her career and being a mom. Chandlar, meanwhile, is something of a prodigal friend who was ousted from the group after a falling out with Nicole, but has recently rejoined its ranks. Nicole suffered a pretty traumatizing series of events, including the father of her first child becoming paralyzed following a BMX accident, and the father of her second child struggling with addiction.

Rounding out the cast are Alyssa, a nursing student who's struggling to stay afloat emotionally while managing her mother's failing health, and Cheyenne, the married mom with her own set of challenges. Cheyenne's husband struggles with keeping a job and so the family lives with Cheyenne's dad. According to her MTV bio, she has "to leave the nest and take control for the good of the family, but can she do it?"

Nicole and her friends' lives as moms and youthful party girls may not exactly reflect the usual experience of young motherhood, but it is some aesthetically delightful escapism.

Find out how this friend group ticks when Pretty Little Mamas premieres.