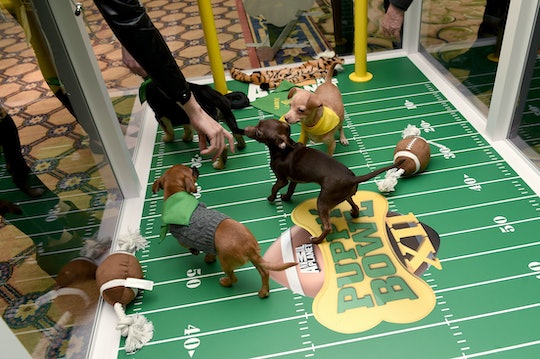 Fetch Your Kibble, I Mean Popcorn, Because The Puppy Bowl Is Around The Corner

If tradition holds, Sunday, Feb. 3, will host the biggest television event of the year when the Super Bowl captures nationwide attention. But if your Super Bowl party is anything like mine, right up until the game starts, another wild (and totally adorable) competition will be on your TV: Animal Planet’s annual Puppy Bowl. But when exactly is the Puppy Bowl this year, and what’s the story behind this super cute throw-down anyway?

The Puppy Bowl has been airing for 15 years, as “rufferee” Dan Schachner previously told TODAY, and it kicks off before the Super Bowl at 3 p.m. ET/12 p.m. PT on Animal Planet. It’s usually broadcast as a marathon, so during commercials of the Super Bowl or if the game is lagging, I’ve certainly been known to switch over and check in on the cuteness.

Though the Puppy Bowl is billed as an adoption event, and all the puppies are from shelters, viewers may not realize that it’s actually filmed months in advance, according to Variety. And Animal Planet proudly proclaims on its website that 100 percent of the featured puppies have ended up being adopted.

The genesis of the Puppy Bowl came from an unlikely source, according to Ad Age, the Christmas yule log that so many stations have broadcast over time. And while the first Puppy Bowl was a little more than puppies chasing each other around a set of a small football field, the broadcast has come a long way. Now the shoot is a multi-day affair that involved nearly 50 staff members to oversee the action, according to Mental Floss.

In 2019, 93 dogs from around the nation participated in the Puppy Bowl, as TODAY reported, including a couple that are special needs. In fact, Puppy Bowl host Schachner told TODAY that a three-legged pup named Bumble and a hearing-impaired pup named Will can be spotted giving it their all on the field. He also mentioned in the same interview — much to everyone’s surprise — that he’ll have a sloth assistant this year (“for the slow-mo replays,” he explained) and kangaroo cheerleaders. This just keeps getting better and better.

The puppies are divided into two teams, Team Ruff and Team Fluff, according to NBC News, which can be distinguished by bandanas on their necks. They compete for the Lombarky trophy — a play on the Lombardi trophy that is awarded to the winner of the Super Bowl — by carrying toys strewn around the field into the end zone. How they know which end zone to head for I have no idea, I don’t suppose any of us really care since they’re all good dogs.

The pups play for 20 minutes at a time and are rotated out, according to Variety, where they either nap or play with their wranglers.

But unlike professional athletes, when it comes to the Puppy Bowl, “the less trained, the better,” as executive producer Melinda Toporoff told Variety, adding: “That’s what makes for adorable television in this case — if puppies are falling asleep on the field, we love it.”

Now, that also means there are a lot of penalties, which Schachner is in charge of calling, like paws interference, rough sides, whining, napping, and premature watering of the lawn, as the Chicago Tribune reported.

All in all, the Puppy Bowl makes for some of the best viewing on TV these days. If you’ve seen it, you know. And if you haven’t, then plan on tuning in for at least a few minutes on Sunday and, like the rest of us, you’ll quickly become a huge fan.