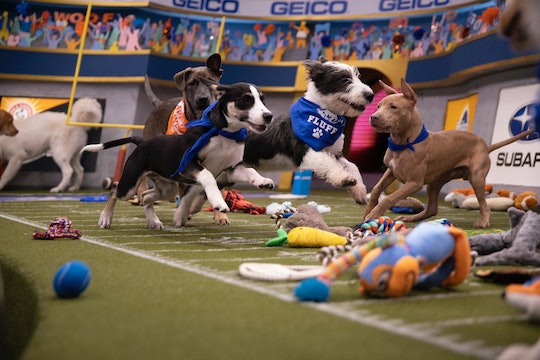 Thought You'd Like To Know Puppy Bowl XVI Is Airing Next Month. You're Welcome.

As millions of viewers will tune into Super Bowl LIV next month, those who want to experience the adorable side of the game know to flip on the 2020 Puppy Bowl. This year's match features a slew of cute doggos representing Team Ruff and Team Fluff, so you certainly don't want to miss the action.

To witness the adorableness unfold as dozens of puppies show off their football skills, be sure to mark your calendars for Sunday, Feb. 2. Animal Planet will air Puppy Bowl XVI at 3 p.m. ET on Super Bowl Sunday, which is hours before official kickoff time. But if you really want to get the full coverage, then you'll want to tune in at 2 p.m. ET for the pre-game show when you'll be able to catch commentary from canine sports correspondents Rodt Weiler, James Hound, and Sheena Inu.

As far as the main event is concerned, this year's lineup will feature more puppies than ever — 96 puppies from 61 shelters, to be exact, according to the network — making it the biggest Puppy Bowl yet. And you can bet the two-hour event is sure to elicit plenty of awwws, along with an endless amount of dog-related puns as the pups compete for the prestigious CHEWY “Lombarky” trophy at GEICO stadium.

For the ninth year, Dan Schachner will be returning to the grid iron as a "rufferee" for the Puppy Bowl. Joining him will be television correspondent and animal advocate Jill Rappaport, who will be introducing "Pup Close and Personal" segments that give viewers a deeper look into the heartwarming tales of the canine-athletes. "Pup Close and Personal" profiles will also include actress, comedian, and animal rescue advocate Whitney Cummings.

Other Puppy Bowl attractions include a trio of energetic baby pygmy goats and a trio of playful armadillos, who will serve as cheerleaders for Team Ruff and Team Scruff; a halftime show featuring adorable kittens; along with five players with special needs that are looking forward to finding their forever homes. In other words, the 2020 Puppy Bowl is shaping up to be a seriously action-packed — and incredibly cute — way to spend your time ahead of Super Bowl LIV on Feb. 2.