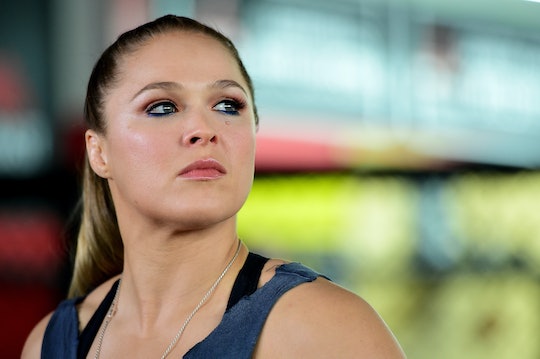 Ronda Rousey Is Bringing The Fight To Shark Week

There are a few major things that mark the arrival of summer. For some it’s the lightning bugs in the yard, for others it’s the super hot weather. For me, summer officially arrives with Shark Week, a week-long TV event dedicated to everything shark. But for its 30-year anniversary, Shark Week is bringing in a bunch of celebrities, including fierce UFC champion and Olympian Ronda Rousey. So, exactly when is the Ronda Rousey Shark Week special airing on the Discovery Channel? Because you definitely do not want to miss it.

The special, Ronda Rousey Uncaged, airs on Sunday, July 22 at 10 p.m. ET on the Discovery Channel, as part of the line-up for the first day of Shark Week. In a synopsis for the special, the network described it as a test for Rousey, in which she will get to see how far her tough spirit can take her when it comes to facing some of the most dangerous creatures in the sea. “Olympian and UFC Hall of Famer Ronda Rousey sets out to test her courage and prove the fighter mentality that made her a champion will allow her to stare down any opponent,” the network's description reads. “Even the Mako Shark.”

But just like any fight she’s been in before, Rousey is going to go into this fully prepared. Rousey, who is a rookie diver, will be trained by former Navy diver and shark attack survivor, Paul De Gelder. He will coach her through three different survival rounds, in which she will train to face ocean heavyweights, including the notoriously dangerous Bull Sharks. All her training will lead her to a “Main Event” in which she will actually step (or swim) out of the diver’s cage to face a deadly Mako shark.

In an interview with TV Insider, De Gelder revealed that Rousey was as tough and impressive underwater as she was in the ring. He explained that even though she was an inexperienced diver, she quickly became comfortable diving in shark-infested waters, and after eight dives, she was able to feed Bull Sharks without any hesitation. “There are people who have dived their whole lives and have never hand-fed a bull shark,” said De Gelder. “So, we did about eight dives. Toward the end of those she is like, ‘I’m ready to do this.’ We took her down. I fed a shark right in front of her, so she could see it, and it’s fresh in her mind. Then she fed three or four bull sharks on that dive. It was incredible to watch.”

De Gelder also told the outlet that Rousey remained optimistic and excited throughout all her training, even when she first got to dive with a Mako shark. “The fastest shark on the planet and one of the fiercest,” he recalled. “She was like a kid in a candy store.” He also explained that while she was ready to face each dive head on, he and his team took her through everything as slowly as possible, so that she would never land herself in any danger. De Gelder, who lost an arm and a leg to a Bull shark attack in Australia back in 2009, knows all too well the dangers of swimming with sharks, so he made sure that Rousey remained as safe as possible.

Since her dive, Rousey has posted a few pics of her dives, while promoting shark conservation efforts as well. So her Shark Week experience seems to have left a lasting impression. As a big fan of Rousey myself, I can’t wait to see her trade in her fighting gloves for diving fins on Ronda Rousey Uncaged.