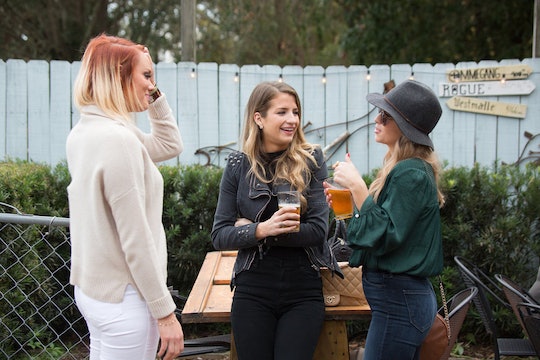 The 'Southern Charm' Reunion Is Going To Be Intense

Southern Charm has had a season full of ups and downs, with some relationships unexpectedly falling apart while others surprisingly strengthened. But the dust hasn't really settled on a Bravo show until the reunion special airs and all the remaining dirt is dug up once and for all. So when is the Southern Charm Season 5 reunion?

The Season 5 finale, "Ho, Ho, Ho," airs on July 12, which means the multi-part reunion will likely commence a week later on July 19. According to Watch What Happens Live with Andy Cohen, it was filmed a month ago on June 12 in New York City and the titular host described the reunion as so "intensely dramatic" that it had totally exhausted him. That's certainly promising for those interested in a maximum of TV drama, and luckily the main event is just around the corner.

The reunion will give viewers an update on what everyone in the cast has been up to since filming finished. Or almost everyone — there will be at least one absence on the couches, and the reason why is sure to be a topic of discussion amongst the remaining Southern Charm stars. Thomas Ravenel was disinvited from the reunion because of offscreen allegations of sexual assault.

Thomas has been central to much of the turmoil on the show for years, and Season 5 was no exception. His relationship with his new girlfriend Ashley Jacobs led to dissent with his ex-girlfriend Kathryn Dennis, who is also the mother of his two children Kensington and St. Julien. Thomas and Kathryn have had to figure out how to co-parent while navigating their own complicated past as well as Kathryn's often-combative relationship with Ashley.

But while Ashley will be present at the reunion, Thomas will not. Bravo did not share a reason for this in their initial announcement of the news, but according to Radar Online, an anonymous source close to the show claimed that Thomas wasn't invited because "with everything going on, it seemed better to the execs not to have him there."

Bravo then released a statement explaining that they would be investigating the allegations with Haymaker, the production company behind the show. As reported by Variety, Bravo said they were taking the allegations "very seriously" and their plan was to gather and review all the available information. After that, "appropriate action will be taken."

According to Page Six, however, the two women who have come forward have not been contacted by either the network or the company. Yet another anonymous source stated that Bravo and Haymaker had to hold off on their investigation until the police were done with theirs. None of this information is officially confirmed, but it seems like the situation is still in the middle of being dealt with. Thomas' lawyer Richard P. Terbrusch denied the allegations in a statement to People.

It's not certain what that means for the future of Southern Charm. The show was renewed for a sixth season, but Thomas' continued presence on it likely depends on the outcome of the investigation. While his absence will be noticeable during the reunion, it's possible that because the situation is ongoing, no one will be able to legally comment on it. It's hard to imagine that Andy Cohen won't address it at all, but it may have contributed to the reunion being especially emotionally draining. Viewers won't know for sure until the episodes air.

The Southern Charm Season 5 reunion is sure to be as fraught as the season has been, with plenty of arguments and conflicting opinions. But it might also lead to major changes in the show going forward.