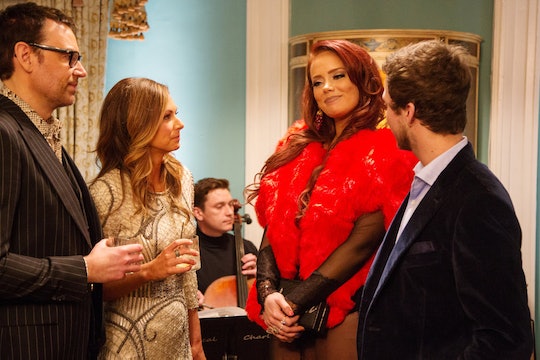 Here's Hoping Shep Gets Dragged At The 'Southern Charm' Reunion

The reunion episodes come quick on the heels of the finale, so Part 1 of the reunion will air on Aug. 21. The reunion specials are generally three parts in total, so it should carry fans through the end of August. And considering how action-packed "White Gloves Off" is bound to be, viewers might be craving the clarity a reunion can bring. It gives all the cast members a chance to explain their choices from the season, as well as spark up some new feuds when friction inevitably occurs. Plus they get to shout at each other over Andy Cohen while wearing tuxes and gowns. A little sparkle can really elevate a petty spat.

However the finale shakes out, one can likely expect the Southern Charm Season 6 reunion to rehash the same dilemmas that have been afflicting the cast all season long. Kathryn Dennis will surely wear something shockingly fabulous and give updates on her kids, her stylish new home, and what can only be dubbed the Ashley Situation. It isn't clear yet whether Ashley will be attending the reunion or not, but it seems likely; she's been starting arguments in enough episodes that she may want the option to air her grievances.

Shep's response was seemingly to bring Austen's video partners to the finale get-together at Patricia Altschul's. I'm sure that goes just swimmingly. But on the off chance that it does not, I guarantee Shep and Austen and Madison will have a lot to say to one another on those reunion couches. And since the reunion is airing just a week after the finale, viewers won't have long to wait to see how it all turns out. Whatever happens in the finale (which is sure to be eventful), the cast will have Andy Cohen to help them untangle it in just a week's time. And it sounds like it may need some serious untangling.