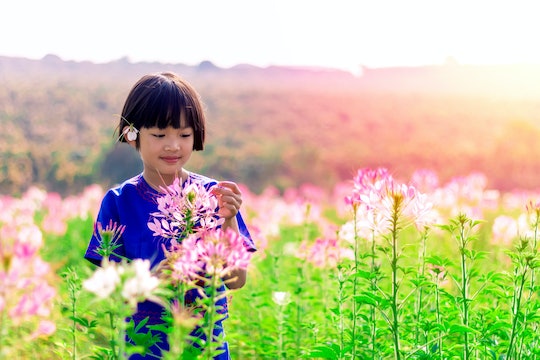 Here's What *Actually* Happens On The Spring Equinox, Which Is Just Around The Corner

The spring equinox, also called the vernal equinox, marks the first day of spring for the Northern Hemisphere. In 2018, the spring equinox falls on Tuesday, March 20. The date is slightly different from year to year — March 19, 20, or 21 — because it's based on a very precise measurement: the moment the sun crosses the celestial equator from south to north (the celestial equator is the imaginary line in the sky extending straight up from the earth's equator, as explained by the Telegraph). And this year, that exact moment is 12:15 p.m. Eastern Time.

As a result, no matter where you are on earth, the sun will be spending about the same amount of time above and below the horizon, making night and day almost equal length. In fact, that's where the word "equinox" comes from — "equi" is the Latin word for "equal," and "nox" is Latin for "night."

After the spring equinox, the days get gradually longer leading up to the first day of summer on June 21, aka the summer solstice, which has the longest day and shortest night of the year. Then the days get shorter again until the autumnal equinox, which happens on September 22 this year, when day and night are again almost equal. From there, the days get gradually shorter until the winter solstice on December 21, which is the shortest day and longest night of the year.

Of course, all of this only applies in the Northern Hemisphere — for everyone south of the equator, it's pretty much backwards: On the equinoxes, day and night are almost equal, but the June solstice is the shortest day, and the December solstice is the longest. And people who live on the equator won't notice much difference at all on the equinoxes, since, for them, day and night are almost the same length year-round.

And, while we usually think of the spring equinox as marking the first day of spring, it turns out that that's only halfway correct. There are the seasons as defined by the earth's rotation — called astronomical seasons — and the seasons as we experience them in terms of temperature — called meteorological seasons. Because of factors like leap years and the elliptical shape of the earth's orbit, the astronomical seasons vary in dates and lengths from year to year, according to the National Centers for Environmental Information.

That isn't hugely convenient, so that's where meteorological seasons come in: Spring is in March, April, and May; summer is in June, July, and August; fall is in September, October, and November; and winter is in December, January, and February. Those divisions fit much more neatly with yearly temperature and weather changes, and are much more useful when it comes to calculating seasonal statistics for everything from agriculture to commerce.

People around the world have been celebrating the spring equinox in a big way for millennia. The Mayans built El Castillo, a 79-foot pyramid, around 1000 AD. They seem to have designed it so that during the equinox sunset, the angle of the light hitting the pyramid creates what looks like the shadow of a massive snake slithering down the pyramid steps, according to Atlas Obscura. There's also Angkor Wat in Cambodia, which was constructed in the 12th century AD and was designed to interplay with astronomical events throughout the year. On the spring equinox, if you stand in just the right spot by the western entrance gate, you could "see the sun rise directly over the top of the central tower of Angkor Wat,” according to Science magazine.

There are also plenty of celebrations that continue today, like the Persian holiday of Nowruz, which means "new day" in Persian. The 13-day New Year festival begins at the moment of the vernal equinox, and involves many symbolic decorations and foods, according to NPR. In Japanese culture, Shunbun no hi, or Vernal Equinox Day, coincides with the six days of Higan, which is when families come together to honor their ancestors by washing their gravestones and replacing flowers around their burial sites, as explained by the Huffington Post.

But if you're looking for a simpler, extremely kid-friendly way to mark the occasion, why not participate in World Storytelling Day? A weeklong celebration that begins every year on the spring equinox, World Storytelling Day is just about having "as many people as possible tell and listen to stories in as many languages and at as many places as possible," as explained on the website. So call on your inner J.K. Rowling and see what you and the kiddos can come up with.