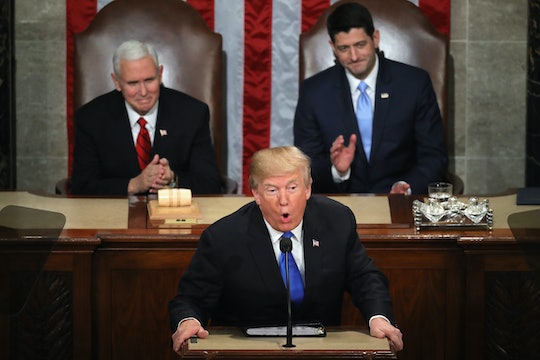 Trump's State Of The Union Address Finally Has A Confirmed Date

This year's State of the Union address was originally set to occur on Tuesday, Jan. 29. But due to the government shutdown, House Minority Leader Nancy Pelosi decided it was best to postpone President Donald Trump's message to the nation until further notice. As for when the State of the Union will finally happen? Its scheduled date is sooner than you might think.

The annual State of the Union address brought Trump and Pelosi's ongoing feud to a breaking point. Pelosi — who repeatedly criticized Trump's position on the government shutdown and his proposed border wall between the United States and Mexico — rescinded her invitation to host the event at the House of Representatives, as is tradition. According to Vox, she cited security concerns caused by the government shutdown as the reason, which made sense given the staffing issues with the Secret Service and the Department of Homeland Security at the time.

"I am writing to inform you that the House of Representatives will not consider a concurrent resolution authorizing the President's State of the Union address in the House Chamber until government has opened," Pelosi wrote in a letter to Trump on Wednesday, Jan. 16, according to The Washington Post.

“I’m not surprised,” Trump said in response to the message, according to Deadline. “It’s a shame what’s happening with the Democrats."

Trump and Pelosi's standoff came to an end, however, when the government was reopened on Friday, Jan. 25.

"With government now re-opened, I have invited @realDonaldTrump to deliver the State of the Union address on Tuesday, February 5," she tweeted Monday night alongside a letter she sent the president.

Trump responded with his own letter, writing in part: "We have a great story to tell and yet, great goals to achieve!"

Any ideas on what this "great story" could be? I'm drawing blanks at the moment.

It's likely Trump will make another pitch to Congress to fund his $5.7 billion border wall during the State of the Union address on Tuesday, Feb. 5. The president discussed this exact topic when he announced Friday that the government will reopen for three weeks as border security negotiations continue.

“We really have no choice but to build a powerful wall or steel barrier,” Trump said about his proposed wall, according to The New York Times. “If we don’t get a fair deal from Congress, the government will either shut down on Feb. 15, or I will use the powers afforded to me under the laws and Constitution of the United States to address this emergency.”

Pelosi has argued against Trump's border wall claims before, stating that he's "manufacturing a crisis," according to The Boston Herald.

Given what's at stake here — aka a functioning government — it's fair to assume many people will tune in on Feb. 5 to hear what Trump has to say in his State of the Union address. It's unlikely, however, that Trump will be able to persuade Democrats to fund his border wall. And since both sides are firm in their positions, it certainly seems possible the government could go into shutdown mode once again starting Feb. 15.