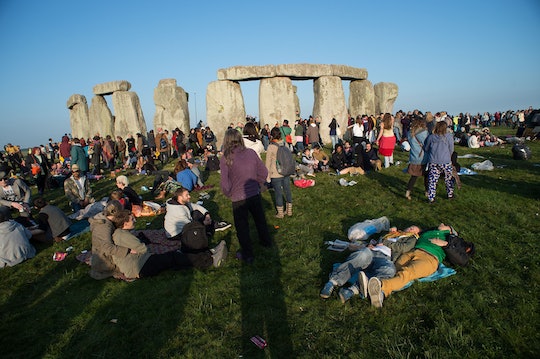 For many people, Memorial Day weekend is the official kickoff to summer, but astronomically speaking, summer doesn't actually start until the summer solstice. If you're wondering when the summer solstice is, mark your calendars for Thursday, June 21. It will be the longest day of the year (in the Northern Hemisphere anyway), which means it's time to start planning some solstice fun. When you're blessed with 17 hours of daylight, you must take advantage of it, even if it's on a weeknight.

But before you start planning a solstice shindig, let's dive into what exactly the summer solstice is. If geography class seems like a distant memory, don't worry, the good people at Scholastic broke it down in layman's terms: "The day that the Earth's North Pole is tilted closest to the sun is called the summer solstice." If you want to get more detailed, the summer solstice is when "the sun's high point in the sky, called a zenith, reaches its maximum of the year. From space, it's when the sun's most direct rays creep the farthest north, to a line called the Tropic of Cancer," explained Business Insider.

The June solstice has long been a day to celebrate summer, the fertility of the season, and new beginnings. In fact, solstice celebrations date back to ancient times. "Some believe that Stonehenge's unique stone circle was erected around 2500 BCE in order to establish the date of the Summer Solstice. Viewed from its center, the Sun rises at a particular point on the horizon on day of the June Solstice," explained Time and Date. It is for this reason that people flock to Stonehenge for the longest day of the year.

If a trip to Stonehenge isn't in your future, there are plenty of other ways to celebrate the solstice. Midsummer festivals are a huge part of Scandinavian culture, with people donning floral wreaths and feasting with friends well into the night. If you want to throw a Midsummer soiree fit for a Swede, don't forget to stock up on the aquavit and strawberries!

You can also celebrate the summer solstice by heading to New York City's bustling Times Square to join in a huge, communal yoga session that is held there every year. Last year, more than 12,000 yogis participated in the free summer solstice activity, according to the Times Square Alliance. Watching video footage from the event, you can't help but feel all the positive vibes emanating from the massive group doing Warrior Two's in unison. Interestingly enough, the summer solstice also happens to be International Day of Yoga.

However, you certainly don't need to be part of a large crowd to get your solstice on. In fact, one of the best ways to celebrate the start of summer might just be alone in the wee hours of the morning. “Wake up early with the sun. Watch her rise,” recommended Lisa Levine of the Brooklyn healing center Maha Rose, in an interview with Vogue. “When the sun is low in the sky, you can stare into her. Fill your eyes and your body with her light.”

If you're looking for ways to introduce your kiddos to the summer solstice, there are plenty of fun ways to include them in the action. You can head to a bonfire to celebrate pagan-style, or you can seek out one of the many Stonehenge look-a-likes scattered across the United States. You can also opt to make it an educational day, making human sundials or reading science-oriented books like The Longest Day: Celebrating the Summer Solstice by Wendy Pfeffer ($5, Amazon).

No matter how you choose to celebrate this year's summer solstice, enjoy every last second of the longest day of the year!