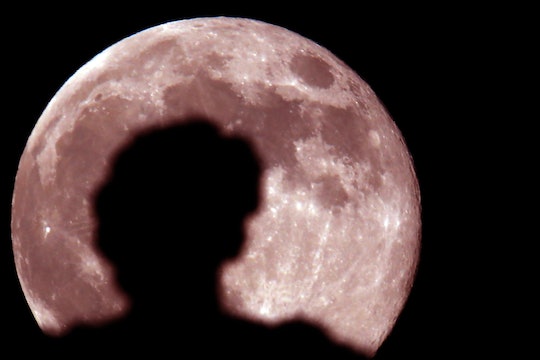 If your family could use a break from another night gathered around the TV, tonight's super pink moon presents a perfect opportunity to get outside for a bit of stargazing. But exactly when is the super pink moon supposed to happen? The year's biggest supermoon is expected to rise Tuesday night.

Traditionally, a supermoon occurs when a full moon or new moon coincides with what's known as perigee and refers to the closest the moon can come to Earth during its orbit, according to EarthSky.com. When at or very nearly at perigee, a full moon appears to be slightly larger than normal to those of us viewing it from Earth. While the difference may not be dramatic — NASA reports supermoons appear roughly 17% bigger and 30% brighter than the year's faintest moon — it's still worth viewing.

In fact, the supermoon set to occur on Tuesday, April 7, is reported to be the closest of this year's supermoons, making it the biggest and brightest moon we'll see in 2020. According to CBS News, this super pink moon will be a mere 221,851 miles away when it becomes a full moon at 10:35 p.m. EST.

But don't expect to look up in the sky and see a moon that's actually pink. The name super pink moon stems from the fact that the moon's April appearance coincides with the blooming of pink wildflowers in North America, according to The Old Farmer's Almanac. While Tuesday's supermoon won't actually be pink, it's still slated to be awe inspiring.

"It will be bright and brilliant and absolutely gorgeous," Jackie Faherty, an astronomer with the American Museum of Natural History, told Space.com.

Another special thing about this month's supermoon is it's accessibility. Although the ongoing pandemic has much of the world sheltering inside their homes, catching a glimpse of this sure-to-be spectacular supermoon doesn't require straying far from home or even having a backyard.

"Another great thing about a full moon is that it is up all night," Faherty told CBS News. "It rises in the East and sets in the West so [it] will cross the sky for you. If you are in an apartment or not interested or capable of stepping outside, get yourself to your window and figure out what direction you are facing. The moon will hopefully make an appearance for you at some point in the evening."

While Tuesday's super pink moon will, weather permitting, be visible all night, Faherty recommended that those who are able to head outside for a look do so at moonrise. You can easily check the time of your local moonrise online here.