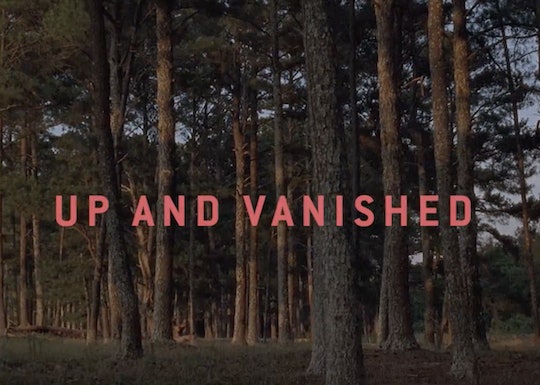 Everything You Need To Know About The 'Up & Vanished' TV Show

True crime podcasts are fascinating. Nothing makes household chores or an evening commute go by faster than listening to an episode about the chilling (and true) stories about people who have gone missing or criminals who haven't been caught yet. But now, one of those podcasts, Up & Vanished, is making its big TV debut. And those wondering when the Up & Vanished TV special is airing won't have to wait too long to see it because it's airing in just a few weeks.

The first season of Up & Vanished debuted in 2016, after the show's host, Payne Lindsey, wanted to see if he could investigate a cold case crime, according to Cosmopolitan UK. After searching news articles and forums, Lindsey set his sights on the disappearance of Tara Grinstead — a school teacher and beauty queen who seemingly vanished from her Georgia home in 2005. Although the first season had a very satisfying end, there is still so much that fans of the first season don't know about the case and haven't seen with their own eyes (since you can only listen to Up & Vanished). And this special is going to help with that.

With the recent debut of the podcast's second season, Oxygen is now revisiting the first season and Grinstead's disappearance by airing an Up & Vanished special — which will debut on Sunday, Nov. 18 on Oxygen. The special is going to focus on Grinstead, Lindsey, and his investigation, according to Oxygen. If that didn't sound exciting enough, the trailer for this special looks super promising — providing visuals to Lindsey's already thrilling podcast.

In the special (which will be wrapped up by the end of the episode), fans of the podcast will get to see the people and places that they only heard about through the episodes, which is super satisfying. But it is unclear how much new information will be released in the special — especially since the special promises to "pick up where the podcast left off," according to Oxygen. Of course, anyone who kept up with the podcast in 2016 or has binge-listened to it in the years since knows what happened "in the end." After Lindsey did some investigating, police were able to finally arrest someone in relation to Grinstead's murder, 11 years later, according to the Atlanta Journal-Constitution.

Based on the trailer for the special, viewers will be able to get familiar with those arrested in relation to Grinstead's reported murder — Bo Dukes and Ryan Duke — and draw a conclusion about their arrests. But since the show doesn't air for another three weeks, fans can refresh themselves on the case by re-listening to the first season of Up & Vanished.

It's hard to believe that Lindsey had no previous experience solving crimes before the first season of Up & Vanished aired, which made him set out to get as much information as he could, using his best resource — talking to people. "I just started talking to people," Lindsey told Cosmopolitan U.K. "That's all I knew how to do, and that's all I did. It just snowballed from there."

His knack for communication led him to dig deep into the case, which caused others in Grinstead's small town in Georgia to talk more about the case. After someone called the Georgia Bureau of Investigations with a tip about the reported suspect in the crime, police were finally able to make an arrest in the case, according to Rolling Stone.

"That created fear in the people who knew what happened, and I think that's what ultimately led to the tip coming forward," Lindsey told Cosmopolitan U.K.