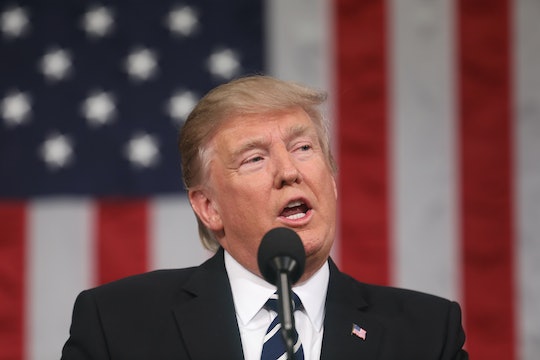 When Is The White House Correspondents Dinner?

The dinner will be taking place on April 29, according to the White House Correspondents' Association — but as it turns out, no, the president is not double-booked. When Trump first announced that he would not be attending the event, he didn't provide an explanation. He simply tweeted: “I will not be attending the White House Correspondents' Association Dinner this year. Please wish everyone well and have a great evening!”

Many questioned whether Trump was skipping the dinner out of fear of being targeted by speakers. After all, both former President Barack Obama and Seth Meyers made many a joke at Trump's expense when he attended the event in 2011 — prompting Trump to look on, stone-faced and seemingly unimpressed, from the crowd.

Some even suggested that the 2011 White House Correspondents' Dinner was the reason Trump decided to run for the presidency in the first place, but Trump told The Washington Post that the assumptions weren't true. "There are many reasons I’m running, that’s not one of them," Trump told The Washington Post last year. He added that he enjoyed his time at the dinner, despite Meyers' "nasty" jokes. "It’s such a false narrative," he said. "I had a phenomenal time. I had a great evening."

Whether it's because of Trump's aversion to organizations such as CNN (which he has repeatedly labeled "fake news") or because of lingering discontent from 2011, it looks like Trump won't be in attendance. But the show will go on, and anyone else who is interested in catching the event can tune in on April 29 to watch the White House Correspondents' Dinner take place as usual.