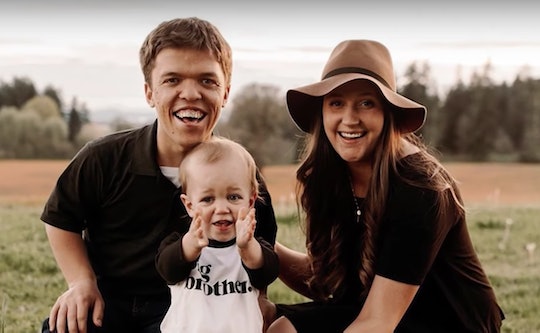 The Roloffs are adding one more baby to their brood! After previously sharing that they were hoping for "a little pack" of kids one day, it seems that they received exactly what they were hoping for. With all the excitement on the horizon, some fans might be wondering: When is Tori Roloff due? The Little People, Big World star just announced that she's expecting her second child with her husband Zach.

On Instagram this week, each of the Roloffs shared a sweet photo of themselves and son Jackson, 2, standing in a pretty field at sunset, holding a sonogram photo, and a blue and pink balloon, symbolizing the little sister that's on the way.

"Zachary and I are so excited to announce that Jackson is going to be a big brother! We are expecting a sweet baby girl this November!" Tori wrote. "Thank you so much for always supporting our family and loving us!" (For those who need extra clarification: we can expect baby Roloff #2 in November 2019, as Tori shared.)

Zach then shared a few photos from the same shoot, informing fans of the happy news. "Grandpa is hitting the lotto!!" Matt Roloff, Zach's father, shared on the photo. "My heart is full of so much love over this. This grandma is so happy and for you both!" Amy Roloff, Zach's mother, added.

Other friends and followers continued to share their well wishes for the couple. "Still brings tears to my eyes!!!!! Soo excited for you guys!!! Jackson is going to the best big brother!!!" one follower added. "We love this little girlsie so much! We can’t wait to meet her and watch her grow!! Love you friends!!!" another friend said.

However, the news isn't a total surprise to fans, given that in an interview with Us Weekly earlier this year, Zach shared that he and Tori were "ready" for more kids, but were waiting on the timing. “We have plans,” Zach told the magazine about adding more Roloffs to the clan. “We want a family. I would love four or five kids. I want a little pack. Right now, we’re just kind of [like], if it happens, it happens.” Tori agreed, sharing with Us Weekly that it's just about when: “It’s just on God’s timing and just whenever. We’re ready for it."

Ready they were, as they are sharing the happy news just a few months later.

Some fans may also be wondering whether the new baby will have Dwarfism like her father, Zach, and older brother, Jackson. Essentially, it's a genetics game at this point, and as we know of fraternal twins Zach and Jeremy — one whom is a little person, the other whom is not — it's a toss up.

Tori previously spoke out on her Instagram about her stress regarding whether or not her first son would have Dwarfism. “There was obviously some fear," Us Weekly reported she shared, though it didn't last long. “I have the best resources at the palm of my hands and I was fortunate enough to have some background knowledge,” she wrote on social media. “I can only imagine the fear of a parent who has no experience with dwarfism but I can only hope we can provide some sort of reassurance to them.”

Tori is likely feeling all the jitters that come with being an expectant mother, and likely feels just as certain that no matter what happens, she and Zach will be able to handle anything that comes. Congratulations to the happy family!