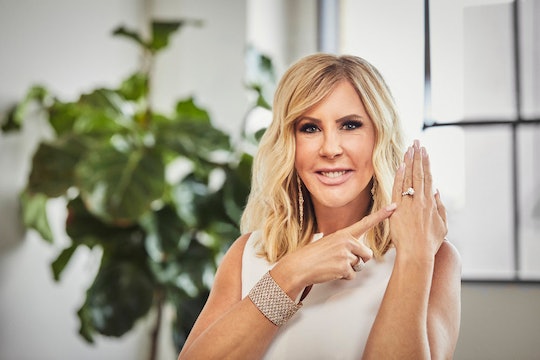 Vicki Gunvalson may not be a regular on the upcoming season of The Real Housewives of Orange County, but she still has plenty of exciting things to plan for this year. The reality star is engaged to her longtime boyfriend Steve Lodge, and the two are in the midst of planning their nuptials. There’s no doubt it will be a star studded affair, but exactly when is Vicki Gunvalson’s wedding?

As of now, Vicki hasn’t revealed a wedding date, but I’m sure she’ll let fans know when she’s ready. She shared her engagement news on Instagram in April, and in the comments section of a recent post, she asked fans whether or not she should make her wedding public. So if you’re looking for an exact wedding date, it’s a good idea to keep an eye on her social media pages.

Vicki and Steve have been dating for three years, and in an interview with Us Weekly, she described how perfect and timely his proposal was.

It was just him and I and a bottle of Silver Oak wine and I was like, we cannot drink on a school night, tomorrow’s work and he’s like, ‘Just relax, let’s just have a glass of wine.' So he’s doing the dishes and he sits back down and I’m like, ‘What are you doing? Why are you acting weird?’ And he’s like, ‘I love you and I want to share my life with you, will you marry me?’ … I didn’t even need to think about it!

When talking to People, Vicki revealed she wanted a low-key wedding, and would set a date according to her schedule. “Maybe on a ranch or in the country, just something really easy,” she said. “I don’t want the big ballgown — We might go to Vegas one day! Who knows? When it’s right, it’s going to be right. But right now I’m just happy with him and we have a great time together.”

Fans of the Real Housewives know that this happy ending has been a long time coming for Vicki. The self-titled "OG of the OC," Vicki has been a part of the franchise since the first season of the first installment, making her the longest-running Housewife around. And in her nearly 14 years of Houswife-dom, Vicki's love life has been through plenty of ups and downs. The show chronicled her divorce from Donn Gunvalson, followed by an ill-fated relationship with Brooks Ayers who was most notable for faking a cancer diagnosis in order to win public sympathy. Now, however, her "love tank" appears to be full to the brim again.

Though fans will definitely get to see some of Vicki and her new fiancé, she won't have quite the starring role she used to on the show. Us Weekly reported that for Season 14, Vicki has been demoted to a "Friend of the Housewives" rather than a main Housewife which I'm pretty sure marks the end of an era.

But if that era ends with a Vicki happy and in love, married to someone who doesn't pretend to have cancer, I'm all for it.