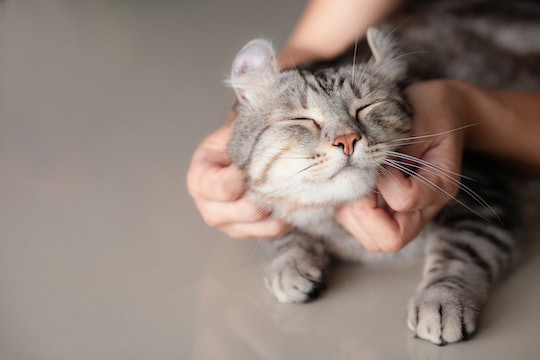 World Cat Day Is Another Excuse To Worship Your Cat, & No, You Don't Mind At All

Everyone knows cats are the original stars of the internet. Sure, videos of dogs winking are all the rage now, but no pup can ever overshadow Grumpy Cat's legacy. And it's time for the feline loving world to come together once again, thanks to World Cat Day. Cat Nip and long naps for all are in order.

In case you're unfamiliar, World Cat Day is a global day of celebration for all things feline for every human, rather than just the cat lady population that usually heralds their furry friends. The holiday is not to be confused with National Cat Day, America's celebration of the most purr-fect creatures on earth, which falls in October. No, World Cat Day is on August 8 every year, according to National Today, bringing those feline friendly feelings to the end of summer. And since it's a global holiday, you'll be able to log online and see festive posts in honor of the day no matter what time you decide to hop on social media, giving you even more opportunities to see much-needed cat content.

There's definitely no shortage of cat content come any cat-related holiday, considering how much of the population are cat owners. 30 percent of Americans own a cat, according to the American Veterinary Medical Association, and although dogs get the reputation as man's best friend, humans and cats have an equally long relationship as companions. Per the Ancient History Encyclopedia, cats were domesticated around the same time as dogs in 12,000 BCE as a way to control pests. (That dead mouse your cat brings you every other week makes more sense now, huh?) And the ancient Egyptians associated cats with the divine, which is why so many of their sculptures have feline qualities, reported The Smithsonian. It's a common misnomer that they worshiped the cats themselves; rather, they saw elements of the gods in cats behavior, leading to the art we study now.

Plus, in the Elizabethan age, cats served multiple societal functions that helped humans. They helped to stop the spread of the plague by eating rats, and they served as weapons of war by acting as a kind of moving bomb that could destroy enemy territory, per History Hit. Flammable material was attached to their backs, and since they run so quickly, they would wreak havoc on an area until they were caught. It wasn't an ethical practice and you definitely shouldn't replicate it now, but the history highlights how long cats and humans have been intertwined. Basically, our love of and reliance on cats is nothing new.

So you can use World Cat Day as an opportunity to set the record straight on how important cats are to the world by celebrating your kitten and everyone else's. Give your cat some extra treats, buy them a new toy, or post a sweet pic of them on Insta to spread the global cat love. The paw-ssibilities are endless. Whatever way you choose to honor your furry friend, your cat will feel extra loved and pampered, as they deserve.